Local students marched through Town Center on June 2 to protest against police brutality and in response to the death of George Floyd at the hands of four white Minneapolis police officers. The protest remained peaceful and garnered a lot of support from cars passing by.

Hundreds of peaceful protestors gathered at the intersection of Bothell-Everett Highway and 164th Street SE on Tuesday, June 2, in response to the death of a black man named George Floyd at the hands of white Minneapolis police officers, and to show support for the Black Lives Matter movement. The protest was led by high school students and word spread through social media. These are photos from the peaceful protest and a full story will be in the June 5 issue of the Beacon. 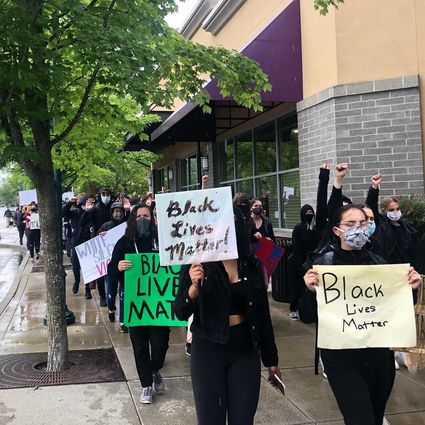 Students marched from Bothell-Everett Highway/164th St. SE intersection and then through Town Center, chanting "Say His Name" and "Black Lives Matter" in protest of police brutality after the killing of George Floyd in Minneapolis.