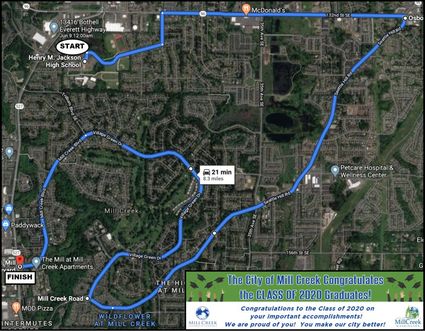 Update: An earlier version of this story said that the all 250 spots had been taken as of Thursday night. That was incorrect – as of Friday morning, there are still spots left. We regret the error.

Schools have been closed since mid-March due to the coronavirus pandemic, and many graduations will be performed without traditional, in-person, ceremonies. The City has organized a drive-through car parade for graduating high school seniors scheduled for Saturday, June 13.

Registration has been opened to 250 seniors, up from the original 100, after the limit drew criticism on social media earlier this week. It is also open to college graduating seniors.

Spots filled quickly after the City announced the expanded limit on Thursday. For comparison, there a few hundred seniors at Jackson High School (where many Mill Creek residents attend) but kids in the city also attend Glacier Peak and Cascade high schools, with their own graduating classes of a few hundred each.

The parade will start at Jackson High School and end at the intersection of Mill Creek Boulevard and Bothell-Everett Highway (SR 527). The route is approximately seven miles long.

The City has asked that only people living together in the same household ride in the same car. Graduates and their families are asked to decorate their cars and homes, and the Mill Creek Kiwanis Club will be there to take pictures.

"We're proud to support and recognize our area graduating seniors," said Mill Creek City Council member John Steckler, who helped organize the parade. "This has been a difficult year for them and we want to celebrate their achievements and give them the recognition they deserve."

Registration is located at https://www.signupgenius.com/go/70A0C4DA4A828A2FC1-testing.

Who: Area graduating seniors (limited to 250)