The city has had an emergency proclamation since March. 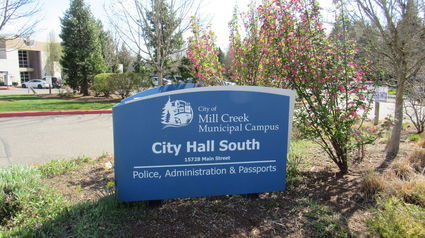 Public access to City Hall has been restricted until July 1 and the City Council has extended the City's emergency proclamation.

The City of Mill Creek has extended its emergency proclamation until July 1, it announced in a statement. City Manager Michael Ciaravino first signed an emergency proclamation due to the coronavirus on March 20. The proclamation allows the City to restrict access to City Hall and suspend some operations, but the staff is still working. See its press release below.

"The City Council made the announcement at its regular meeting on May 26. The City announced its initial proclamation on March 20 in response to emergency declarations regarding COVID-19 from the Washington state and Snohomish County governments, and recommendations from the Centers for Disease Control.

"The City of Mill Creek will continue essential municipal government operations during the health crisis while prioritizing the safety of residents and employees.

"City parks are open to the public but public restroom facilities and playground equipment remain closed. City employees are available by phone at (425) 745-6175. Non-emergency police services are available by phone at (425) 745-6175. Additional information can be accessed on the City of Mill Creek's website, http://www.cityofmillcreek.com. If the call is an emergency, call 911."