Three candidates have already registered with the state to run for Mead's position in the state House of Representatives.

Mead was chosen over current City Councilmember Stephanie Vignal and Mountlake Terrace Mayor Kyoko Matsumoto Wright for the District 4 position. The district covers Mill Creek, Bothell, Brier, Mountlake Terrace, and some unincorporated areas of the southern part of the county.

Ryan resigned earlier this year to become the county's first-ever aerospace and economic development director. A longtime Mill Creek resident himself, Ryan served on the Mill Creek City Council for 17 years, including four terms as mayor. He was elected to the County Council in 2013 in the District 4 position.

Mead served on the Mill Creek City Council for half of one term before being elected to the state House of Representatives in 2018. He represents the 44th Legislative District, along with Rep. John Lovick and Sen. Steve Hobbs. All three are Democrats.

Wanting to spend more time with his family was the reason Mead gave for his move back to the local level.

"Part of it was trying to strike the right balance of my commitment to public service and my commitment to my family," he said. "I want to watch my kids grow up, and be here for my wife, and not have so much of the burden on her shoulders."

The legislative session for state representatives can be up to 105 days long (in odd-numbered years) and they can be called back at any time for special sessions if needed. Mead said his job in Olympia made it difficult to balance raising him and his wife's young family.

He said he will finish his term in the Legislature, which ends in December of this year. He has already started working on the County Council and will be working in both the state and local positions until the end of the year. Mead said it didn't feel right to leave his current job in the state Legislature in the middle of the COVID-19 pandemic since it would take a while to find a replacement, and there may be a special session this summer due to budget issues driven by the virus.

Although there are some things he will miss at the state level, he's excited about the move.

"The big change is that you're working on policies a lot closer to home. On a county level, you get to do things that you directly see the change in like when you're talking about road improvement, environmental conservation, budget, hirings, or small business development. You get to see the immediate implications of your actions," he said. "In the state Legislature, you work on very high-level policy so you don't necessarily get to go home and see it (in action)."

A county councilmember's salary is roughly $126,500 in 2020. Due to the COVID-19 pandemic, the council held its meeting over Zoom, a video-conferencing app, instead of in chambers.

April Berg, a Democrat from Mill Creek, Anne Anderson, a Democrat from Lake Stevens, and Mark James, a Republican from Marysville, have registered with the state Public Disclosure Commission to run for Mead's seat in the state Legislature. Mead holds Legislate District 44 Position 2 in the state House of Representatives.

Berg was just elected to the school board for Everett Public Schools in 2019. She previously served on the Edmonds School District board. She registered to run on April 8 and has not yet reported any contributions to her state campaign.

Mark James, a Republican from Marysville, has also registered to run for Mead's position in the state Legislature. He registered to run in December 2019 has received $13,645.10 in campaign contributions. He originally filed to run for Position 1 in Legislative District 44 (Rep. Lovick's current position) but switched when he learned Mead was taking the County Council seat, he told the Beacon. He has been a Marysville City Council member since 2018 and publishes Hometown Values Coupon Magazine, according to his LinkedIn page.

The top two candidates in the August primary will advance to the general election in November. 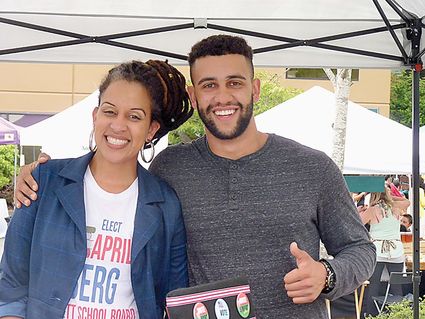 April Berg and her son during a campaign event for her Everett school board campaign, which she won this past November. She's running for Jared Mead's seat in the state Legislature.

Information from the Public Disclosure Information about the candidates here: https://www.pdc.wa.gov/browse/campaign-explorer/candidates?jurisdiction_code=4866&election_year=2020&office_code=13&share=true