COVID-19's impact on Mill Creek police: calls down, everyone healthy

All officers and their families are currently healthy, acting chief says 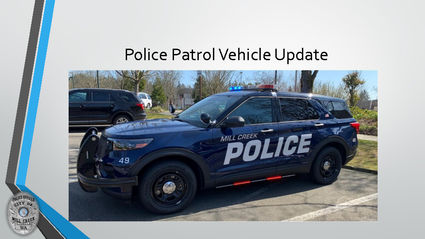 The Mill Creek Police Department just got a new police car. Police vehicles get disinfected every two weeks amid the COVID-19 threat.

None of the Mill Creek police officers have had known contact with someone who is positive for COVID-19, and thankfully, all officers and their families are healthy, according to Acting Chief Scott Eastman.

"We have had nobody who has been ill because of COVID-19 and, in fact, we haven't had any of their family members (become ill)," Eastman told City Council members April 14.

All of the department's staff who can work from home are, and those who are still required to go into the office have limited their hours and have staggered shifts so few people as possible are in contact with each other. The department is "doing OK" on personal protective equipment, and will be receiving several gallons of hand sanitizer from local distilleries in the future, Eastman said.

However, officers and detectives still have to go into the field.

"We had a close call with two individuals who had tested positive but had since recovered" when officers met them, Eastman said.

The department is handling many calls by phone, and if in-person contact is needed, officers will triage the situation before going into a person's home. It's a precaution, Eastman said, and gives officers an idea of who is in the home and if they're sick.

"(We're) still handling emergency calls in person; people are still being arrested" though, he said.

If officers became sick and staffing was affected, Eastman said he is working with the county and other local partners on a plan to help fill in potential gaps. There are multiple phases to the plan. Right now, the community is in phase zero. Phase 3 is the most restrictive. "There would be some property crimes that we would not be responding to at all" during Phase 3 operations, he said.

In comparing the month of March between this year and last year, calls for police service decreased by a third but fire department calls increased – but only by 1%.

Domestic violence calls also nearly doubled from February to March of this year (six calls to 10), but looking at the annual increases from March 1 to April 8 showed calls decreased by half (27 calls versus 15).

"Anecdotally, officers have seen we're getting fewer domestic violence calls in general. (It's) really not a big change but certainly consistent," Eastman said.

Since schools are closed through the rest of the year per Gov. Jay Inslee's orders, school resource officers have also been moved to detective and patrol work.