Commercial travel has been drastically curtailed at Snohomish County airport only weeks after its 1,000,000th traveler 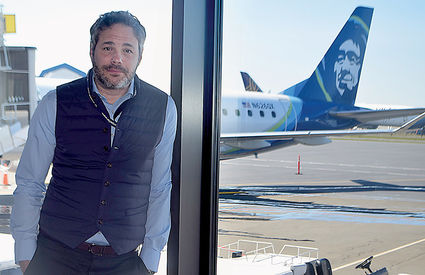 Propeller Airports CEO Brett Smith stands in front of an Alaska Airlines plane in the passenger terminal at Paine Field. Commercial flights out of Paine Field have been reduced from 24 to 5 as a result of the coronavirus pandemic.

In a span of just a few weeks, Propeller Airports CEO Brett Smith has experienced unimaginable highs and lows.

Propeller Airports, which designed, built, and operates the passenger terminal at Paine Field, celebrated its 1 millionth traveler in late February right before its one-year anniversary of operation in the first week of March.

To the best of his knowledge, Smith said Paine Field is the only airport in the last 40 years that has started from scratch and served 1 million passengers in less than a year.

The airport received rave reviews from travelers, and also was named one of USA Today's 10 best small airports in the country.

A terminal that previously had been bustling with business people and families is now largely empty with just a handful of passengers for each of the current five daily flights.

"It's quite a dichotomy where we are today," Smith said.

The number of daily passengers varies, but it is far below the 3,000 people who filed through the terminal on a typical day. "It's a fraction of what we were doing," Smith said.

Paine Field might have about 100 travelers on a busy day.

"There are days that we've done 11 passengers," Smith said.

Given the travel restrictions the state and the country are under, Smith expects it will take some time before Paine Field's numbers get back to normal.

"Until these lockdown orders are removed and people are able to freely move about, not just in their own community, but statewide, regionwide, nationwide, it's going to take air travel some time to come back," Smith said.

He added that the travelers flying out of Paine Field are going somewhere for a very specific reason.

Because of the lack of passengers, many of the airport's vendors have had to scale back.

"We're doing our best to maintain a level of service," Smith said. "So while our concessions are now closed because there aren't enough passengers, we're giving out free coffee. We're helping people if they need water or snacks."

Smith didn't have specific numbers on how many people have been furloughed by the terminal's vendors, but no one on Propeller's staff of 20 has been laid off.

Between Propeller, vendors, TSA and other law enforcement personnel, Smith estimates 300 jobs were directly created by the new terminal. He added that between 1,000 and 2,000 indirect jobs can be attributed to Paine Field. Smith said the airport has produced at least $300 million in economic output in the past year in Snohomish County.

Those figures weigh heavily on Smith as he ponders the future of commercial flights out of Paine Field.

"Our community can't rely upon one or two companies for their economy," he said. "This just diversifies Snohomish County, Mukilteo, Everett, Lynnwood and so forth. ... My goal is to keep this open because there are a lot of people's livelihoods on the line. So if the terminal were to close, you basically would have 300 people out of work immediately. And it trickles down, and the indirect jobs get hurt also."

Smith appreciates that Alaska and United are still operating flights out of the airport.

"They deserve a lot of credit for continuing service here because there are some people that desperately do need to travel," Smith said. "They're keeping our community open for those necessary trips. I think it also speaks to the commitment that Alaska and United have to this market."

Paine Field received some good news from the U.S. Department of Transportation last week. The airport will receive $157,000 in relief funding under the CARES (Coronavirus Aid, Relief, and Economic Security) Act.

Because the amount of the federal grants was based on 2018 passenger numbers, Paine Field received significantly less than other airports operational during that time. Commercial flights out of Paine Field started in March 2019. Seattle-Tacoma International Airport will receive about $192 million and Bellingham International Airport will get about $5 million. Arlington Municipal Airport was awarded $69,000. The total amount of federal funds is $10 billion – airports in Washington will receive more than $310 million.

As he surveys the largely deserted passenger terminal, Smith is resolved to do what he can to keep passenger service at Paine Field going.

"I feel a sense of responsibility to all the people who have made this a success," Smith said. "To see this terminal empty is sad because I know how much joy it brought to a lot of people.

"It'll come back. You just have to have a positive attitude. We look forward to being here and continuing to serve the community once this is over."