A family's experience with COVID-19

"I'm super healthy, no underlying conditions, I'm 45 years old and this kicked me on my butt." 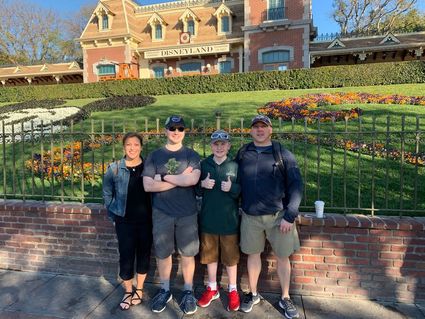 Melinda Knight and her family, during their recent trip to Disneyland. They all felt sick, to varying degrees, after coming home. Melinda eventually tested positive for COVID-19.

Melinda Knight and her family had just recently returned from a trip to Disneyland when one of her sons began feeling sick.

"It just hit through all of us," she said. "Now I'm just kind of at the end of it. It's a nasty virus – there are symptoms that are nothing you've ever felt before."

It was President's Day weekend when her 12-year-old son, Payton, felt sick.

"He was sick for about three days and only got upper respiratory (symptoms)," Knight said. Luckily, his school was off for a four-day weekend since they had an in-service day that Friday. He returned to King's, a private Christian school in Shoreline, when he felt better.

The next weekend, his 16-year-old brother, Rylie, got sick. "He had to miss a whole week of school," Knight said. He went to school for only a couple of days after he felt better, and then King's moved to distance learning due to the virus. Knight said she had not heard of any other cases in the school, but added that they don't know if he contracted the virus from the family's trip to Disneyland, but they probably will never know.

Remember – the country was just coming to grips with the virus back then. No social distancing measures had been implemented in Washington. Although Gov. Jay Inslee declared a state of emergency Feb. 29, social distancing didn't start until he closed schools in Snohomish, King, and Pierce counties March 12. He expanded the closure to the entire state the next day, and more measures followed.

Knight, herself, got sick March 4. Unlike her sons, she has been sick for nearly a month and experienced many more symptoms.

She said she went to the Everett Clinic in Shoreline on March 9, about five days after she started feeling symptoms. She was dehydrated after having high fevers for several days.

"Everybody's hands were tied at the time ... they treated what they could, gave an IV, and anti-nausea (medicine). They were already wearing PPE (personal protective equipment)."

Since she hadn't recently traveled to China and didn't have a dry cough, she couldn't get tested at first.

"Back then, nobody could get it unless they worked in health care, or had traveled to China – I think it had to be really strict; they had to keep the supplies they had. I hadn't had a cough yet," she said over the phone.

It took Knight almost two weeks from the onset of her symptoms to get tested for the virus. She is the only person in her family, still, who has been tested and confirmed to have COVID-19. Knight said she thinks her family was some of the first cases in Washington.

A variety of symptoms

"I pretty much got hit in every place of my body. It was pretty crazy," Knight said. "Things they weren't reporting – I was hit with a really high fever and it lasted for several days, then it went to my gastrointestinal tract - upset stomach, diarrhea – and I just felt crummy." She said she didn't get the hallmark dry cough until later when it had devolved into pneumonia.

First, she felt the virus in her head, with a fever. "In those first few days I hit 104 (degrees)," she said, which was unusual since she usually doesn't go over 100 when she's sick.

Then it went to her sinuses. "It was deep. Not like a normal cold; it was deep behind your eyes," she said. Knight also noticed she couldn't smell or taste her food. Back then, the loss of taste and smell was not a widely reported symptom.

"I have a cat that goes poop in our bathtub, and normally I can smell it throughout the house. I was sitting next to the bathtub and there was a poop in it and I couldn't smell it. I asked my husband if he could smell it, and he couldn't either."

Her husband, Brent, got sick on March 10. He had body aches in addition to the loss of taste and smell, but no dry cough, and generally experienced mild symptoms.

Knight went back to her doctor at the Everett Clinic. "He treated what he could at the time," she said. She received a prescription for an antibiotic and an inhaler, and the doctor made a note for her to get tested for COVID-19 once testing opened up to more people.

"Quickly after that, maybe three days later, I didn't want to get up out of bed. I felt weird, no energy, and felt like something was really wrong, something was different." Knight said she reached out to her doctor at the Everett Clinic through an online portal; the doctor called in another antibiotic and told her to get tested.

She went in, the doctor listened to her lungs and did an X-ray. He gave her the test on March 18.

"You go through this hell, and at that point you want it to be positive just to have an answer," she said.

Knight said it seemed like she wasn't responding to the first antibiotic because she was getting fever spikes. She later learned that the fever spikes were actually a sign the medicine was working, but her doctor gave her a new, secondary antibiotic. She ended up going to the emergency room one night because of a bad reaction to the new medicine.

"It wasn't her fault; we couldn't have known that I would have a terrible reaction," she recalled. She felt extremely weak and couldn't use her legs, so she called 911 and landed in Swedish Edmonds the night of March 21, where she was treated as a possible positive case.

At this point, she still didn't know if she had the virus.

"Everything happens really fast and it changes. That's what's scary; you don't know what's going to happen and you know it could also get worse."

She'd been following the coronavirus in the news and knew how quickly it hit some patients and how quickly they could take a turn for the worse. At the time, Knight didn't know if she was going to come home.

They got her test results that night. She was positive for COVID-19.

Thankfully, she was able to go home the next day, since her symptoms were just a bad reaction to the antibiotic. She has been recovering at her home in Edmonds.

She's been back to the doctor a couple of more times to check on how she's healing, and she said she's at the tail end of her illness. The doctors looked at her lungs to check on pneumonia, as well as checking her other major organs. She's doing well now, except for a cough and a lingering fever that typically spikes at night. She also said her bottom lip is puffy and feels numb.

She has also participated in two studies of the disease. The first study was for researchers to develop an at-home test.

The second study is to measure Knight's antibodies and see how long the virus can be detected; it's being done out of the Everett Clinic's lab in Mill Creek.

"It feels like you have an alien in your body. It's the weirdest feeling, and people (are weird), too, when they find out you've had it. They're scared; there's so much unknown."

Knight said she hasn't left her house in weeks except to go on a walk on her street (once) or step out into her yard or go to the doctor. Her husband, who hasn't had symptoms for weeks, goes to the grocery store early in the morning and wears a mask.

Her house is on a quarter of an acre, but she thinks her neighbor is still a little scared. She plans to stay home until long after she stops showing symptoms.

"I was kind of surprised at the stigma. Once you've had this, nobody wants to be around you. It's sort of like having a plague."

"I do have to say I'm a bit of a homebody anyway, so the staying at home part is not that hard for me. But that stigma – the people who openly say they're scared to see you. I wasn't expecting that. I don't blame them, and I don't take it personally. It's just kind of surreal."

Yoga, meditation, and mental self-care were already a part of Knight's routine before the virus, and she said they helped her while she was sick, too.

Although she said she "obsessively" followed the news (who can blame her?), she tried to watch TV shows that were positive or funny. She said she's glad her family is tight-knit and is able to use technology to talk to others.

"Gatorade is really important to have on hand, and a very, very good thermometer," she said. Knight tracked her symptoms through an app on her phone that was linked with the thermometer. She also took supplements and has been drinking vitamin-infused drinks like Emergen-C.

"The key when you're healthy is you've got to be on top of it when this happens," she said, suggesting people speak with their doctor or health-care provider if they begin showing symptoms. She thinks she could have had a much worse outcome if not for reaching out to her doctor, or her doctor even reaching out to her.

"I'm super healthy, no underlying conditions, I'm 45 years old and this kicked me on my butt."