The Beacon has a courtesy list of area restaurants open for take-out and/or delivery during this difficult time. . 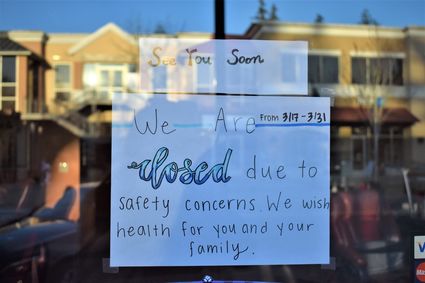 Social distancing is a difficult adjustment for everyone, but especially small businesses who may have had to close for a couple of weeks to help stop the spread of COVID-19.

COVID-19, the disease caused by the novel coronavirus, has taken over daily life in a way that hasn't happened in recent memory.

"The world is upside down," Mike Pederson of Central Market told the Beacon during a phone interview Friday, March 13.

Six-week, statewide school closures. Bans on gatherings of 50 or more people. Stores closing their doors temporarily. And it's almost impossible to find certain items like hand sanitizer and toilet paper.

After multiple closures that became stricter as the last two weeks went on, Gov. Jay Inslee announced March 16 that all bars, restaurants, and entertainment and recreational facilities must close until the end of the month in an attempt to help stop the spread of the virus.

There hasn't been a major disruption to Mill Creek businesses like this before. Some businesses are doing curbside pick-up, take-out or delivery service only. Others have had to lay off all their hourly employees and temporarily close.

Here are some of the stories of how Mill Creek businesses have been impacted during this difficult time.

"Right now, the business is a little like a snow scare," Pederson, the store director of Central Market, said. He echoed what many readers have been talking about online, saying hand sanitizer, disinfecting wipes, and other cleaning products flew off the shelves.

When asked if he knew when there would be more, he said the problem went all the way back to the manufacturer. "If we can get any, it's a case here, a case there. So hand sanitizer is not 'gettable' ... The system isn't equipped for this kind of panic."

The store was trying to track down more, he added.

Central Market isn't among the list of businesses that Inslee's proclamation closed down since it's a grocery store. However, everyone is taking extra precautions to keep the store clean and safe.

"We're taking really aggressive measures to sanitize hand baskets and carts, and we have an attendant on our open bars at all times. We've taken extra measures to enhance sanitization (and) have done a lot of teaching for staff on how to stay safe," Pederson said.

He added that many of the store's staff are elderly – a high-risk group for severe cases of COVID-19 – and said managers were looking into options that keep them away from unnecessary risk.

"We do have people who work here who may have compromised health, or are older, and we're working to find things for them to do that may be outside that of contact. A lot of them are the heart and soul of our company."

He asked shoppers to be patient with the store when they come in, in case they are not stocked with an item they need.

Lee Perry, a sales manager at Arena Sports in Mill Creek who has worked for the company for 22 years, told the Beacon in a phone interview that all of the company's facilities are closed, all hourly employees were temporarily laid off, and managers were working half hours during the closure.

He said he's applied for unemployment securities and for SharedWork, a program that helps businesses pay employees during hardships, like the COVID-19 outbreak, by covering part of the cost of salaries.

Perry said the hourly employees that were let go were put on a temporary status that will make it easier for them to come back to work the second they open their doors again, instead of having to go through the process to hire new people. He said the owner of the company is trying to figure out how to best support employees.

"Obviously, we have no operations, so we're hunkering down," he said. "If this goes farther than June we are going to be in a world of hurt." He said as of now, they are following state and federal guidelines of the closure, and plan to reopen April 24.

"How is the economy going to bounce back? Some companies are still able to work – the Amazons of the world, delivery services – but there are a lot of businesses, especially brick-and-mortar ones, that can't work now. How are they going to get back from this?" he said. "It could be a totally new way to work."

"My wife works remotely and now I'm working remotely. Does it make sense to stay here where the counts are way high and things are closing down? Or we can go to Phoenix and still have a healthy lifestyle. We might see people moving out of the Northwest because they can't get work," he said about his decision to get out of the area.

He won't be speeding on his drive to Arizona, though. "Never made that trip to the Grand Canyon, so why not see it?"

In addition to its campus in Mill Creek, Arena Sports also has facilities in Issaquah, Magnuson Park, Redmond, and SoDo in Seattle.

Paddywack, the pet supply store on Main Street, has moved to an online ordering and curbside pickup operations model that many restaurants are doing. Tuesday, March 17, was their first day.

"There is definitely a small footprint in my store, and because of our location, we get a lot of regulars and just people walking by. We thought it was going to be very difficult to maintain six feet of separation between customers in the store so (online ordering and curbside pickup) was just the right thing to do for our community," Shane Somerville, who owns Paddywack with her husband, said over the phone.

She said they have an online ordering form on paddywack.net/curbside. She only has a few employees working in the store at a time, and either she or her husband work with them.

"We're not laying anybody off, period. We're really attached to our employees. Every business has to do what's right for them but we're lucky to be in a position to be able to get through this. It's going to be tough, though," Somerville said. They did have to schedule employees for shorter shifts, she added.

Her first worry is for the health of her family, employees, and customers, but she's also afraid of the unknown.

"We're committed to staying closed for two weeks, but it could very well last longer than that. We have many decisions to think about how we are going to be able to serve people. We have loyal customers that support us throughout the year, but we are the little guy," she said. "We're not a chain store. We're just one little guy, and we have employees to look out for and obviously ourselves too. We could have financial impacts that are scary to have to think about."

Somerville said she knows it's a difficult time for all businesses and hopes they can make it through.

"I love seeing what other businesses are doing to get creative. I would just ask everybody to do everything they can to support the little guys, to recognize their survival in our community is important. We are definitely the ones who are going to be hit the hardest."

Jaspreet Saini, from Code Ninjas – which opened just last week – has been hit hard by the restrictions due to the COVID-19 outbreak.

Code Ninjas is a place for kids to learn about coding and computer programming, but it's structured like martial arts. Kids come to the "dojo" and work through programming video games to make it to the next "belt," and are helped by "senseis," or teachers.

Saini followed the news carefully for updates. She had senseis sanitize computers between uses, space students farther apart during lessons, asked parents to schedule times to come instead of dropping by (there are usually no appointments at Code Ninjas), and had kids washing their hands often.

Ultimately, the team decided to close the dojo for two weeks. It had just opened on March 9.

"It was heartbreaking. I didn't want to cry in front of my senseis when I was sending this email, but I was very emotional," she said.

"(Closing) is something good for our community but this is a financial setback. We had just opened one week ago and were excited. We had done a soft opening – our grand opening was scheduled for April and that's not going to happen any time soon – and we are paying the rent and other expenses," she said. "We are taking that setback; we have to. There is no other option. We had to cancel all the schedules for all our senseis because we are closed."

Thankfully, parents were understanding. "No one has asked yet to cancel their subscription, thankfully. I am so thankful for all the parents; they are sending me emails saying they hope we are fine."

Saini said she is waiting to hear from headquarters (Code Ninjas has dojos all over the country) about if they will move to an online curriculum. The games students learn can only be used in the dojo for now.

She said parents can enroll their kids in summer camps if they want to help. It can be found on their website: https://www.codeninjas.com/locations/wa-mill-creek

Social distancing measures like these are used to help slow down the infection rate so as not to overwhelm the capacity of the health care system. Although Inslee's restrictions are supposed to end March 31, it is still a possibility they could be extended to help fight the spread of COVID-19.