Police data shows some decreases in crime for the year 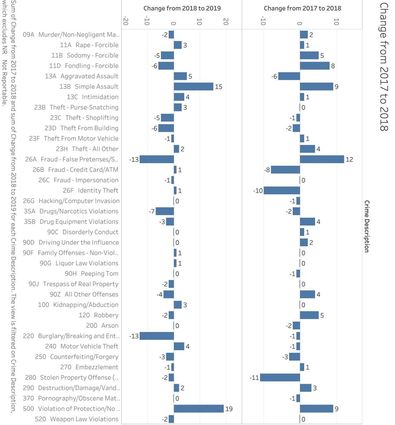 Mill Creek Police Department records show that crime in 2019 went down slightly, but Deputy Chief of Police Scott Eastman said that this decrease may not be significant enough for the community to notice.

"We are seeing essentially the same crime problems that we always do," Eastman said.

There were 316 total crimes reported in 2019, down from 337 in 2018. The most commonly reported crimes in 2019 were simple assault, theft, and violation of protection contact orders. Simple assault (a misdemeanor offense) and theft were among the top three in 2018 as well.

While this data does accurately reflect 2019 criminal activity, the FBI National Incident-Based Reporting System (NIBRS) data will be able to provide more detailed information about violent crime and property offenses when it's released at the end of this year, Eastman said.

Mill Creek is home to just over 20,000 people, according to data from the City. Because Mill Creek is mostly residential, crime patterns usually manifest as domestic violence incidents, simple assault, and property crime such as arson, burglary, and theft, Eastman said. In a city of Mill Creek's size, the prevalence of property crime over violent crimes is not uncommon. The 2019 crime statistics reflect similar results as other equally sized cities, according to Eastman. There is limited shoplifting within city limits due to a lack of commercial retailers, Eastman said. There are very few drug-related incidents as there are very few areas that attract open drug use in Mill Creek, he added.

In Washington state, the likelihood of becoming a victim of property crime is one in 34, according to 2018 NIBRS data. In Mill Creek, this number jumps to one in 63 according to the same dataset. But, in Everett and Lynnwood, the chances of being affected by property crime are one in 24 and one in 23, respectively. Mill Creek Councilmember Vincent Cavaleri is also a Snohomish County

"This city offers so much to its public," Cavaleri said. "It is such a great place to live. I don't just say that because I live here or I'm a representative, it really has nothing to do with that. This city stands out because it is landlocked around other cities that have fairly high crime rates for the county, and yet it still manages to maintain its subtle luster and open spaces and clean areas."

Mill Creek property crime most often occurs at homes and in parking lots, according to 2018 NIBRS data. The community and the Citizen's Patrol play a role in preventing crime, Cavaleri said.

The Citizen's Patrol also assists in coordinating the Citizen's Police Academy. The 10-week course covers topics in criminal law and patrol procedures and educates the community on day-today police activity.

Detective Sergeant Stan White, who also serves as the Community Outreach Sergeant, is the police department's point of contact for the program. "The program gives a bird's eye view of what it is like to be a police officer," White said. "This is what theft is, this is what an assault is, this is some of the crimes that we investigate."

While all citizens are on alert for unusual happenings, the police force is responsible for following through on investigations and arrests, Eastman said. "Our officers are quick to respond," Eastman said. "They are trying to just maintain a good place to live and work, and come visit."