Swedish and nurses' union back to bargaining 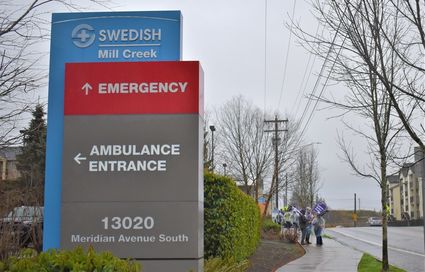 Nurses, environmental service workers and other union members picked every day outside of Swedish Mill Creek during the three-day strike that began Jan. 28.

Bargaining teams from Swedish Medical Center and SEIU 1199NW, the union that represents nurses and other caregivers at the hospital chain, went back to the table Feb. 10. It was the first time the sides had met since the union's 3-day strike in late January.

The teams did not meet in person "since emotions are still high following the strike," as recommended by federal mediators, according to a Swedish statement. Instead, the teams exchanged proposals through the meditators.

According to a Feb. 11 statement from Swedish, there had been some movement on wages, one of the main sticking po...