Here are the highlights of the second half of the year. 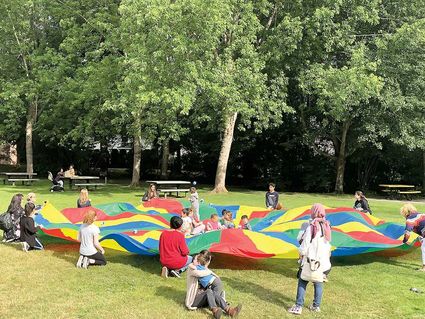 Dr. Ian B. Saltzman replaced Dr. Gary Cohn as Superintendent of Everett Public Schools who retired after leading the district for 10 years. Saltzman signed a three-year contract with the district. Before coming to Everett, Saltzman was the South Region Superintendent in the Palm Beach County School District in Florida, a special education teacher, and a principal.

what he felt was a lack of communication between students and faculty. Minuk (Tony) Kim created a petition “Stand for Student Rights in Everett Public School District,” to challenge what he calls systematic issues. “The voices of students are simply not heard to the leaders and administrators of our school,” Kim said.

Despite rumors of the Senior Center’s closure, it is still a hub of activity a year after it moved to its new location, the Vintage Apartments at Mill Creek, from its old location in City Hall North. Rumors circulated that it was closed.“Those rumors are just wrong,” Darla Richards, a program manager at the Senior Center at the time said.

Joni Kirk was fired Aug. 2 months after Kirk had recorded a termination meeting she had with Gordon Brink on her personal cellphone without Brink’s permission in March. She also did not tell the public records officer about the recording when records requests were made. In Washington state, it is a crime to record someone without their consent. Kirk said that the recording was for her personal records. According to a city press release, “The city concluded that Ms. Kirk showed poor judgment. The city does not have trust and confidence that she could satisfactorily perform her duties as Director of Communications and Marketing and represent the city’s best interests in a leadership role.” Brink was reinstated as a communications coordinator in July.

Members of the Mill Creek City Council gave their blessing for the engineering requirements needed to buy two small parcels of land that will be used for a roadway to provide two access points for The Farm and related development along the eastern border of the city. One of the properties was a single-family home owned by two people and the other was owned by Advent Lutheran Church. Public Works Director Gina Hortillosa said that the engineering and right-of-way services portion of the planned construction would be done by July 2020.

The University Book Store announced Sept. 5 that it would not be renewing its lease. The closure drew a lot of surprise from the community; the business had been in Mill Creek for 15 years. A significant rental increase contributed to the decision, according to a news release. It closed Oct. 19, 2019. Editor’s note: the storefront is still empty.

The Mill Creek Police Department aims to complete their first strategic plan created in-house by the end of the second quarter of 2020, said Chief Greg Elwin at a city council meeting Sept. 3. The strategic plan is a document used to communicate goals within the department while developing actions to achieve overdue projects. Over the years, any past strategic planning was incorporated into the biennial budget process and updated each time by the department’s command staff without input from outside sources. The council agenda summary said a change in leadership in 2016 allowed the police department to review projects and look for areas of improvement.

Snohomish Elementary school students and their families gathered at the Thoren Family Farm Oct. 12 for the first annual “Wizard of Oz” pumpkin carving festival. The 45 students carved images of cartoon characters into pumpkins to promote their animated version of the movie called “The Won- derGrove Wizard of Oz.” The movie was produced with Wonder Media’s Story Maker technology. It is the first feature-length animated movie created by teams of students from 24 school districts in 10 states and featured scripts, voices, songs, background art, sound design, and animation by the students.

Four students from Jackson High School were named Washington State National Merit Scholarship semifinalists last month. Juliana Mothersbaugh, Emilia Peterson, Priyanka Rao, and Ethan Thong received the highest PSAT scores at Jackson. The state’s semifinalists, along with about 16,000 others across the nation, had the high- est scores on the 2018 PSAT taken by 1.5 million high school juniors.

A Taxpayer Bill of Rights, authored by Councilmember Brian Sullivan, was unanimously approved by the Snohomish- ish County Council Oct. 3. The resolution directs the Office of the Public Advocate to work in conjunction with the assessor’s and treasurer’s of resources to develop and maintain informational materials regarding the property taxpayers’ rights within Snohomish County. “I’ve worked with Brian closely over several years at the county and state level,” state Rep. John Lovick (D-Mill Creek) said. “Brian truly is a champion of the working people, looking for ways to relieve the burden for our taxpayers wherever possible. While serving in the House with Brian, he co-sponsored several bills designed to help the seniors in our communities be able to afford to stay in their homes.”

Mill Creek leadership stayed the same after the general election Nov. 5., although there were some countywide changes. All Mill Creek City Council positions on the ballot were unopposed except for positions Positions 1 and 5. Incumbent John Steckler, appointed to the council two years ago, won his race against Adam Morgan. Incumbent Vince Cavaleri was elected to a second term after running against Carmen Fisher for Position 5. Stephanie Vignal, Mike Todd, and Mark Bond, all incumbents, ran unopposed. April Berg of Mill Creek won against Brian Hollings- head of Everett in the race for the second District 2 director-at-large position on the board of Everett Public Schools. Adam Fortney won against incumbent Ty Trenary in the race for Snohomish County sheriff; Trenary conceded the election before the votes were counted. Also, voters rejected the levy lid lift for Fire District 7, which covers Mill Creek and neighboring cities.

EMS and property taxes increase by 1%

Members of Mill Creek City Council voted to increase both the property tax and EMS levies for residents in 2020 to accommodate a likely increase in City Hall staff, and to cover other expense increases like equipment upgrades. The council voted 6-1 for the tax increase during its Nov. 26 meeting. Proposed staff positions included another school resource of officer, a maintenance worker in the Public Works department, another marketing and communications coordinator, Chief of Staff, and an executive assistant for the city manager.

An anonymous bomb threat led to an evacuation at Glacier Peak High School Nov. 12 while the Snohomish County Sheriff’s Office investigated and authorities searched the building. The Washington State Patrol Intra-Agency Bomb Squad and multiple K9 teams responded to the school. The threat was emailed to a staff member and said explosives would deploy at the school that day. There was no known suspect. Thankfully, no explosive devices were found.

After 15 years as a courtesy clerk at Central Market - in fact, since the first year the store was open - Chuck Elvig became friends with coworkers and customers. A former pharmacist from Minnesota, Elvig retired from his encore career in the grocery industry on his 91st birthday, Nov. 21, 2019. There was nary a moment when he wasn’t taking pictures, shaking hands or chatting with coworkers, friends, and customers at his retirement/ birthday party at the store.

Jared Berks’ Eagle Scout project was to collect 200 boxes of cereal to support the Mill Creek Community Food Bank. However, the 13-year-old accumulated more than 1,100 donations from friends and relatives across the country. The 1,100 boxes equated to 11 weeks of breakfasts for local families. He had cereal mailed to him from Texas, Utah, California, and Georgia. “There is pretty much no stop to the cereal,” Berks said. 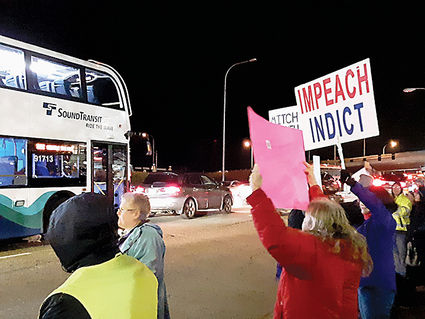 Hundreds of people rallied in Everett on Tuesday, Dec. 17, on the eve of the impeachment vote in the U.S. House of Representatives. SnoCo Indivisible organized the Everett rally and protestors joined thousands of others across the state and the rest of the country. “We are doing what we can to exercise our free speech and affect change,” Kate Johnson, a Mill Creek resident who attended the rally said. The House of Representatives voted to approve two articles of impeachment against President Donald Trump Dec. 18. The first article of impeachment accused the president of abuse of power for asking Ukraine to investigate former Vice President Joe Biden, and refusing $400 million in aid until they announced the investigation. The second article of impeachment was for obstruction of Congress for the president’s refusal to comply with multiple subpoenas for the House’s investigation into the president’s actions toward Ukraine.

The Mill Creek City Council updated the city’s Capital Improvement Plan (CIP), notably add- ing two, million-dollar projects and canceling a smaller one from when the plan was originally adopted in 2018. The plan outlines the city’s goals for 2019-2024. The changes to the CIP included a plan to buy a piece of land for $2.2 million to be used as a park and increased the budget for a Public Works shop to buy a property for $2 million. Another change canceled a project that would have installed a crosswalk beacon on 132nd Street SE in the middle of the block.