Timberwolves tumble to Kamiak, Shorewood in the final two games of 2019 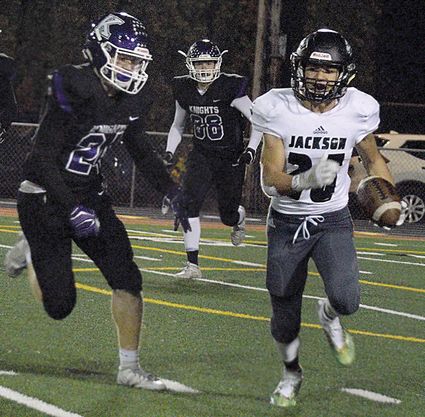 Jackson's Benny Sandico (right) runs away from Kamiak's Jeremy Cooperwood during a Wesco 4A game Friday, Nov. 1, at Goddard Stadium in Everett.

The Timberwolves fell 37-7 to Wesco 4A rival Kamiak and then dropped a 49-3 nonconference game to Shorewood to wrap up the year.

The Wolfpack finished the season 0-7 in the league and 0-10 overall.

"We definitely fell short of our goal, which was going into the offseason 1-0," first-year Jackson coach Mason Siddick said of the loss to the Thunderbirds. "Being a new coach at any new place you expect challenges are going to arise ... Obviously, the scoreboard and win-loss record doesn't reflect what we wanted to accomplish."