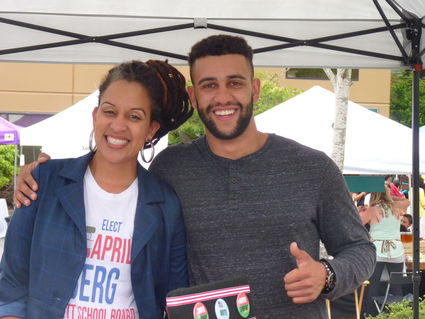 April Berg and her son Issac at a campaign event in July.

April Berg will be the only Mill Creek resident on the Everett Public School board after beating Brian Hollingshead of Everett in the November election. Berg will serve in a director-at-large position for a six-year term. She will fill the vacant seat left open by longtime board member Carol Andrew's retirement.

Mill Creek has seen explosive growth in recent years and the trend is expected to continue. Berg said she thinks it is one of the biggest issues facing schools.

She said that although the school board's recent decision to send some students to Cascade High School in Everett will help alleviate the crowding at Jackson in the next few years, the district still needs another high school to plan for growth in the area.

However, she does not think that putting a bond on the February 2020 ballot would solve the problem.

"The bond has failed three times and the red herring each time was that high school," she said, referring to Jackon's overcrowding. "Now is not the time to put [funding for a fourth high school] on a bond."

Besides planning for growth, Berg said she sees program accessibility for students as a key issue facing the board. Some programs are only available at certain high schools, like the aerospace manufacturing programs at Cascade or the medical and health-care careers programs at Everett High School. Berg said that she knows that every program cannot be offered at every school, but she wants each student to have access to them – and that depends on one important factor.

"The issue really is transportation. We're not going to be able to put every program at every school but we what we want to do is make sure kids who want to go to a program can have transportation accessibility."