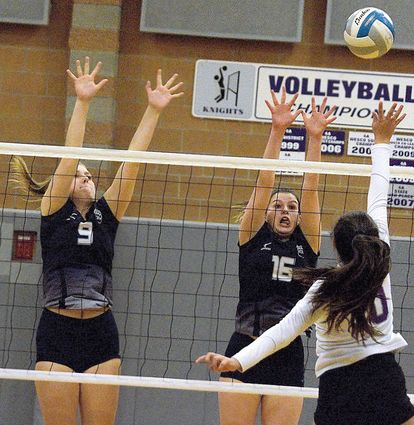 Glacier Peak's Emily Habib and Kaitlyn Wheeler go up for a block against Kamiak during a Wesco 4A match Tuesday, Oct. 15, at Kamiak High School.

Glacier Peak also overcame the loss of two players, one who was sick and did not make the trip to Mukilteo and senior Emma Gluth, who appeared to sprain her ankle during the match.

"The team fought hard," Grizzlies coach Dave Thorn said. "When we were down two games to none, I thought we were in a little trouble. But the team just decided they wanted to fight and fight and fight and they just kept making a couple more plays. We started winning some of those long rallies. Boy, we just slowly worked out way back into the game and the match."

Soderblom said that Glacier Peak's energy in the final three sets played a huge role in the victory.

"We were screaming in our huddle, 'We want this. We want to win,' '' Soderblom said.

The Grizzlies led 11-7 in the first set and had three set points before the Knights eventually prevailed.

"We had a pretty big lead most of the way through the first set," Thorn said. "They just kept chipping away, chipping away. ... They fight. They battle. Nothing goes down easy. That's one of the best defensive teams we've played."

"I thought mentally that kind of got to us," he said.

Soderblom didn't see the fire from the Grizzlies early on in the match.

"We were playing not to lose instead of playing to win and not being as aggressive as we could have been," she said.

Glacier Peak led for all of the third set but saw Kamiak close the deficit to 19-17 before the Grizzlies extended the lead with a 4-1 run. Kamiak had a 14-9 led in the fourth set, but Glacier Peak took the lead with a 7-0 rally. Kamiak led 4-2 in the fifth set, before Glacier Peak responded with a 10-5 run to inch ahead 12-9.

Thorn wants the Grizzlies to cut back on their hitting and serving errors.

"We've got to get that first serve in," he said. "As the match wore on, especially in those last three sets, I thought we did a much better job of putting pressure on them with our serves. We didn't get many aces, but we took them out of system. We made it tougher for them and gave our defense a chance to dig a ball."

Glacier Peak wraps up the season at undefeated Lake Stevens on Tuesday, Nov. 5.