How does government work in this city? 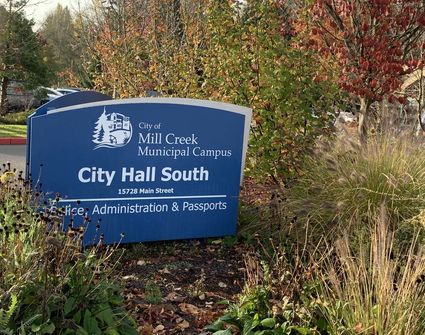 Mill Creek City Hall is located right next to the Town Center. Police, administration, public works, and other departments work out of North and South buildings.

The government in Mill Creek is unique. Without digging through confusing language in the Municipal Code, it can be complicated to understand proper procedures and policies put in place to enforce the City.

The City operates under the council-manager form of government. The council consists of seven members elected to four-year terms. Every two years, the City Council elects a mayor and mayor pro tem internally from its members. However, the mayor holds the same level as power as the other council members.

The mayor, currently Pam Pruitt, serves as the chair of the council. She helps the city manager set the agenda for council meetings, runs the meetings, and acts as Mill Creek’s figurehead for public events. The mayor pro tem fills in for these functions if the mayor is unavailable.

The council establishes budgetary authority for departments and positions, and may determine the duties and compensation of each. The council cannot interfere with the city manager's management of City employees.

The city manager, in consultation with the mayor and/or mayor pro tem, arranges a list of proposed matters deemed ready for council consideration. Copies of the "proposed agenda" are then posted on the City website at least 24 hours prior to the next council meeting.

Regular meetings of the Mill Creek City Council are held on the first, second, and fourth Tuesdays of each month. They begin a 6 p.m. in the Council Chambers on Main Street and conclude after all items on the agenda are discussed. Council meetings are conducted under the current edition of Robert’s Rules of Order (RRO).

Agendas, minutes and audio from regular meetings are added to the Mill Creek’s website by the City’s clerk. Historical files from previous meetings can also be found online.

Interim Director of Communications and Marketing Gordon Brink encourages community members to attend council meetings and participate. He said public support is important to show need and demand within the city.

“Most people don’t know they can come speak,” Brink said. “It is their civic duty.”

Prior to the start of a meeting, all people wishing to be heard are required to sign in with the clerk, give their names and addresses, list the agenda item, and specify whether they wish to speak as proponent, opponent, or otherwise. At any public hearing, those who have signed in will be given an opportunity to speak.

An enacted ordinance is a law passed by a municipal government. Ordinances govern matters not already covered by state or federal laws, such as zoning, safety, and building regulations. Many ordinances deal with maintaining public safety, health, morals, and general welfare.

An adopted resolution is less formal than an ordinance. It is a statement of legislative policy or direction concerning matters of special or temporary character. While resolutions are often just a statement of policy, it may have the force of law. Examples include setting permit fees or declaring certain City properties to be surplus.

A special meeting is called at a date or time other than scheduled regular meetings. At a special meeting, the council may conduct any business stated on the agenda that is publicly posted prior to the meeting. No additional action items may be added to the agenda at the special meeting, although council can approve deletions.

A study session is a regular or special meeting of the council that is typically held in a more informal manner or setting. These sessions are primarily used by the council to receive reports and presentations, review and evaluate complex matters, and/or engage in preliminary analysis of City issues or council business. In general, final votes are not taken at a study session, but there are commonly procedural votes.

The council may organize other meetings with the public in various forums outside of City Hall, such as public forums, neighborhood meetings, presentations to community organizations, and town halls.

An executive session is conducted on a topic that is permitted by law to be discussed by a governing body in a non-public setting. An executive session may be conducted to discuss matters such as the following: real estate acquisition; lease or site selection; negotiations on bid contracts; evaluation of complaints or charges brought against a public officer or employee; evaluation of qualifications of an applicant for public employment or to review the performance of a public employee; and lastly, to discuss City enforcement actions or potential litigation.

The City is comprised of numerous departments, divisions, and subdivisions, which maintain separate databases and record keeping systems. The City has and maintains records stored in multiple locations and in multiple computer systems.

The City produces and receives an uncountable number of records each day, and maintains them in numerous city files. The Public Records Act requires all cities and public agencies to maintain and make publicly available access to and copies of public records.

Any person can submit a public records request and the City is required to respond with either clarifications or the time needed to complete the request. Example records include statistical data, emails of public officials, and voting records.

Brink reminds the public that the City responds to questions, not comments. The departments have limited employees due to the cost of staffing. Something as simple as fixing a swing set has to go through various channels before anything is actively changed.

Lastly, it is important to recognize that the Mill Creek Police Department is contracted to the City. The police department has the power and duty to enforce the ordinances of the City. MCPD consists of four distinct categories of employees: the chief of police, police commander, police officers, and clerical support staff.