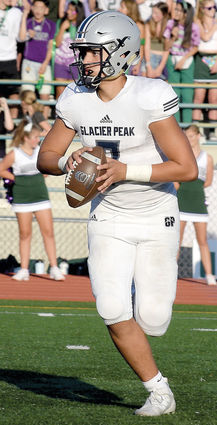 Glacier Peak seems to be hitting its stride heading into the start of league play.

The Grizzlies followed up their season-opening 35-14 victory over Edmonds-Woodway with another dominant performance – 24-3 over crosstown rival Snohomish in a nonconference football game Friday, Sept. 13, at Veterans Memorial Stadium.

"Our kids competed really hard," new head coach Shane Keck said. "They made some plays. That's what won us the game. We did enough to win a football game."

Keck, who previously was the team's defensive coordinator, was elevated to head coach after previous coach Nick Bender...