New quarterback will have a strong supporting cast 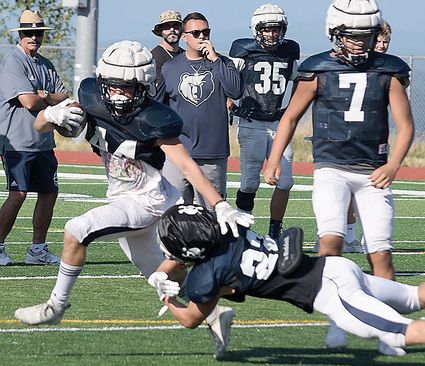 It's the dawn of a new era for Glacier Peak – at least on the offensive side of the football.

The graduation of Ayden Ziomas, who took over as the starting quarterback during his freshman season, means the Grizzlies will have a new leader on offense.

Heading into this week's season opener, Glacier Peak coach Nick Bender and his staff have not yet settled on Ziomas' successor. The decision may not be finalized for a couple of weeks.

Five quarterbacks were under consideration at the start of fall practices and five were battling in the days before Friday's season opener.

"It's a competition," Bender said. "Honestly, it depends on the day. ... It goes back and forth. It's just finding that consistency. As coaches, you don't know what you're going to get every single day, which is fun.

"I think we'll know when we know. But I also think there's a real possibility we might go into game one and possibly game two playing multiple kids and just see what happens."

Bender noted that it's one thing for a player to look great in practice.

"It's another thing to look great in a chaotic environment," he added.

Senior wide receiver Trevor Meldrom said that all five quarterbacks have the skills to lead the offense.

Meldrom admits that it's been a challenge at times working with different quarterbacks during the offseason and at fall practices. The ball can be all over the place depending on who's throwing it.

"We don't have the one guy doing it. We have five people trying to get every rep in," Meldrom said. "It's a little tough with a bunch of people. We manage it. We get it done."

Because Glacier Peak is transitioning from a four-year veteran to a new starter, the offense has been somewhat simplified, Bender said, and the Grizzly ground game might be more prominent.

"The O-line and the running backs we have are a strength of our team," Bender said.

But all the quarterbacks have made significant progress in the passing game since spring.

"I did simplify a lot in the spring," Bender said. "They all absorbed the information so well that we're fairly close to where we were (with Ziomas). It's actually been kind of fun to see how much all of the kids have expanded greatly in that regard."

One major advantage the new starting quarterback will have is a strong supporting cast. Bender said that the talent among the skill positions might be the best in a long time.

The backfield is led by junior Ryan Black and senior Dylan Owen. The two also will see action as slot receivers.

"We've got a couple of other guys," Bender said. "If one kid gets tired, we can just roll in another one and keep going."

Senior lineman Tony McDaniel said he and his teammates are excited to block for their running backs.

"We're pretty deep in running backs," he said. "They're all lifting crazy weights in the weight room. Those guys are huge."

"Coach Bender said it. I agree with him. This is probably one of the most talented skill groups we've ever had," Meldrom said. "We have a lot of talent from quarterbacks, all of our wide receivers and our running backs."

Meldrom and Bender expect the offensive line to continue to be a dominant force. 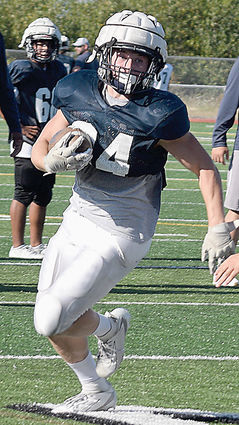 Glacier Peak's Ryan Black runs with the ball during an offensive drill.

"We've been pretty blessed over the years with exceptional linemen," Bender said. "It's the kids' work ethic. A lot of times the linemen are going to be intelligent hardworking individuals. That's what our high school is."

While the offense has a number of new faces, the defense returns many of its key starters – linebacker Black, linemen McDaniel and Bridges and defensive back Meldrom. Defensive coordinator Shane Keck told Bender that he's installed more defensive schemes in the first four days of practice than he did all of last fall.

"The kids are able to pick up so much," Bender said. "We graduated a lot on offense. We didn't graduate a whole heck of a lot on defense and we play a lot of kids. Most of them have game experience in some fashion."

The new look Glacier Peak offense and familiar defense take on Edmonds-Woodway in a nonconference clash at 5 p.m., Friday, Sept. 6, at Edmonds Stadium.