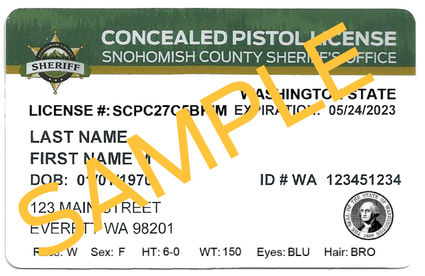 The Concealed Pistol License will now be printed on plastic cards in Snohomish county.

The Concealed Pistol License (CPL) in Snohomish County is now being printed on plastic cards, similar to driver's licenses.

This new system began Aug. 26. The Snohomish County Sheriff's Office will be issuing a CPL that replaces the old, paper format.

According to a news release from Shari Ireton of the Snohomish County Sheriff's Office, the new card is just one of several changes made to improve CPL services for Snohomish County. Residents may now also apply for a new CPL or renew one online, allowing applications to be completed at home or on smartphones.

Applicants must live in Snohomi...