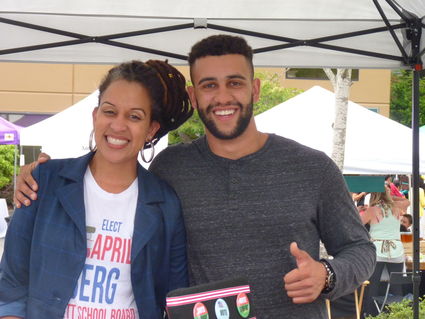 April Berg was photo bombed by her son Issac while she campaigned for a seat on the Everett School Board at the Mill Creek Farmers Market last Tuesday afternoon. Berg is running on the theme One Everett, with an emphasis on making inventive programs available to students at every school in the district. Berg is opposed by public advocate Janelle Burke and business owner Brian Hollingshead in the race to replace Carol Andrews for an at-large seat on the board.

Her warm smile indicates April Berg is sincere when she talks about the changes she would like to implement as a member of the Everett Public Schools board. The firm handshake is proof.

The Mill Creek mom is one of three candidates on the Aug. 6 primary ballot who hope to fill the seat being vacated by the retirement of longtime school board director Carol Andrews. The board position is a six-year term.

Berg claims to be an experienced campaigner with the determination to bring changes to students throughout the vast district. She served on the Edmonds School District board before her family moved to Mill Creek three years ago.

With a grin, she admits that her blended family has more than enough students in the district to form its own soccer team.

“We believe strongly in public education,” she said. “We made a conscious decision to move to Mill Creek so our children could attend Jackson High and Heatherwood Middle School.

“We had a really good sense that this would be a perfect fit for our children, and that the city was the best place for our family.”

Berg will face off in the primary against two opponents, public advocate Janelle Burke and business owner Brian Hollingshead.

Burke is an editor at Wake Up Snohomish County, a support group of young adults dedicated to stop bullying, lies, and corruption by providing a platform for young people to “speak out and be strong.”

She is confident that her presence on the board will bring a new perspective to the discussion of minorities in the district.

“I am a member of the working poor, and I do not mind saying what needs to be said,” Burke said. “My family is not in the same zip code or the same tax bracket as these other candidates.”

She hopes to serve as the “voice of reason” on the district board.

Hollingshead founded Everett Office Furniture 17 years ago and continues to play a role in the day-to-day operation of the business. He attended the University of Wisconsin.

Bond said the Everett district needs to find a way to succeed without funding for a fourth high school.

“Voters have declined a bond issue to pay for a new high school three times,” said Berg. “It is time to face reality and continue to put our students first even without the funding we’d like to have.”

There is no magic bullet, she declared, for dealing with the growth in the district expected by 2022-2024. Berg served on the committee that helped redraw boundaries designed to offset overcrowding at schools in the southern portion of the district.

Another surge in enrollment is expected in 2027, according to estimates from the EPS administrative staff.

The defeated bond would have not only provided funds for a fourth high school, said Berg. But it would have also have paid for modernization and technology upgrades that have forced teachers to work without the tools they need.

She said she is proud of the 95 percent graduation rate at Jackson High, but believes the district can do more to prepare graduates to be prepared for the college or trade schools they will need to compete in today’s economy.

“We’re not pulling all of our kids across the finish line,” she said, emphasizing that she would like to see Everett offer the International Baccalaureate

program at all secondary schools, as well as trade options including aerospace manufacturing and emersion programs that would generate “global students.”

The candidate had pledged to knock on at least 800 doors before the primary and another 1,000 before the general election in November. She also plans to host a series of coffee meetings to give her the opportunity to sit down with parents so she can listen to what they need from public schools.

Collaboration, she said, is the key to success for all students.