Duties of the Coast Guard go beyond party patrols 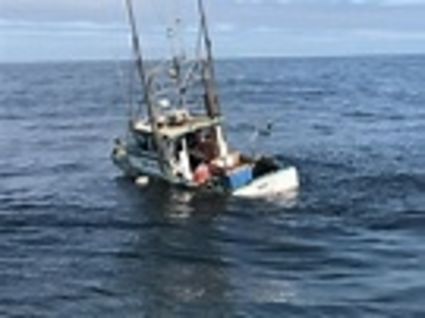 The heroic efforts of the US Coast Guard assure that recreational boaters know somebody will be on the radio if they need help. Boater and shipping consume most of the time for active duty personnel assigned to the Coast Guard stations in Washington.

The orange-striped ships with sailors from the US Coast Guard that patrol the waters of Washington, Oregon and Idaho are responsible for more than checking registrations and policing loud parties.

District 13 of the Coast Guard has authority over commercial fishing regulations, enforcing environmental regulations and protecting inland waters. But their primary mission is to protect the Pacific coastline from attack from hostile forces from the border of California to the straights of Juan de Fuca in northwest Washington.

“District 13 based in Seattle covers a vast range of commercial and recreational boating responsibilities,” said Petty Officer Third Class Trevor Lilburn of Mill Creek, who is stationed at the Coast Guard base on Alaskan Way in Seattle.

“The Seattle base alone is responsible for monitoring the Port of Seattle, the third largest domestic port in the country,” he said proudly. “That includes the Washington state ferry system, which transports 24 million passengers and 11 million vehicles across 10 routes every year.”

The 3,000 sailors assigned to the Seattle-based Coast Guard station are also responsible for the nation’s third largest cruise ship terminal, the nation’s largest grain export terminal and the multitude of commerce that relies on the Columbia River to reach international destinations.

As the often-overlooked branch of the US military, the Coast Guard staffs three bases built originally to protect the Pacific Coastline. In addition to the one on the Seattle waterfront, Coast Guard bases are located in Bellingham near the Canadian border and in the Oregon town of North Bend.

An inland facility on the Columbia near Kennewick is responsible for safety on the vast number of lakes that draw thousands of recreational boaters with varying degrees of compliance at the helm of their vessel.

“There are times it feels like we are policing a college dorm during frat rush week,” said one officer assigned to the Clover Island base in Kennewick.

One incident highlighted vital role the Coast Guard plays in protecting boaters took place last year when the branch of the Coast Guard was called on to assist the Koottenai County Sheriff’s office with monitoring boaters at Lake Coeur d'Alene over the busiest weekends of the year.

According to one local newspaper, crews from the Coast Guard Coast Guard stopped and escorted three boats back to shore for boating under the influence, in addition to ending the voyage of two other boats for negligent operations.

In total, the military contingent stopped 81 boats, issued 21 warnings and were called on to help with numerous EMT responses and commercial inspections in just one weekend.

"A lot of people had their required safety gear," said USCG Maritime Enforcement Specialist Second Class Paul Quaife, "but unfortunately we did have some people who chose to operate a vessel under the influence."

As Lilburn explained, the mission of the Coast Guard is to save lives, not to be on the prowl for rowdy mariners.

In June, the Coast Guard based in North Bend deployed one of its helicopters to conduct a technical rope rescue for a hiker who had fallen into the center of the caldera in Crater Lake in Oregon.

Coast Guard Sector Columbia River Command Center received a dispatch from local authorities at 9:18 p.m. that a hiker had stranded himself on rock pilings and was surrounded by water and oncoming waves.

The aircrew aboard an MH-60 Jayhawk helicopter from Coast Guard Sector Columbia River hoisted the uninjured man and transported him to Air Station Astoria.

One Coast Guard spokesperson compared the duties of the marine-based military to those of firefighters.

“Always on call,” he said. “And ready to respond at a moments’ notice.”

As one of the country's five armed services, the Coast Guard has a unique agency that can trace its history to history Aug. 4, 1790 when the first Congress authorized the construction of 10 vessels to enforce tariff and trade laws as well as to prevent smuggling.

Known variously through the 19th and early 20th centuries as the Revenue Marine and the Revenue Cutter Service, the Coast Guard expanded in size and responsibilities as the nation grew.

The Coast Guard established its presence in the Pacific Northwest with the construction and operation of 16 lighthouses along the coast built between 1852 and 1858. The responsibilities of the Coast Guard in the Northwest expanded in 1854 when the revenue cutter Jefferson Davis was assigned prevent late-night shipping of homemade alcohol from remote ports around the Puget Sound.

District 13 covers the coastal waterways and inland lakes of Washington, Oregon, Idaho and Montana. The sailors and officers have 21 cutters, 132 boats and 11 aircraft based throughout the region to complete their mission.

The largest region in the Coast Guard system also has access to three endurance cutters for high seas rescue, two icebreakers, a port security unit, a maritime safety unit and the security team out of Base Seattle.

Many of those pieces of specialty equipment were used in February of 2018 when Coast Guard crews were dispatched to rescue five members of an 87-foot fishing vessel who were forced to abandon ship when it was engulfed by flames south of Neah Bay.

According to a statement released by the Coast Guard, the pumps on the 87-foot Sunnfjord had failed to keep up with the rising water.

“While responders were in route, the fishermen reported they had their survival suits on, life jackets, that captain put his cell phone in a plastic bag to help keep it dry as they were experiencing issues with their handheld radio, and the water had risen in the engine room to above the floor boards,” the release stated.

The rescued fishermen were transported to Coast Guard Station at Neah Bay.

The Sunnfjord sank approximately six miles offshore in about 300 feet of water. The vessel still had 800 gallons of diesel fuel onboard when it sank below the high seas. Another Coast Guard vessel with environmental containment equipment was dispatched to the scene to protect the sensitive area from against the potential impact of fuel on coastal areas and native wildlife.

Rescues crews from the Coast Guard were stretched thin last June when they performed two rescue operations in the same day off the coast of Oregon. In one incident, a Coast Guard helicopter crew hoisted an injured 26-year old Ukrainian man who reportedly suffered from spasms from a boat 72 miles off the coast. The man had reportedly suffered lacerations two days earlier and had not had his tetanus shot.

The second rescue took place when a Coast Guard helicopter was called in to save a hiker from a ledge in Humbug State Park when officials determined there was no access to safely remove him by land.

Not all the Coast Guard rescues are equally dramatic. Last summer Coast Guard sailors were called in by a Washington State ferry when a man fell off his 39-foot boat near the Elliott Bay Marina in Seattle. The man was reportedly wearing a life jacket and communicated with rescue crews with a hand-held radio he kept above the water until he was pulled onto a 25-foot Response Boat.

Some rescues do not even include people. In July of 2018 the Coast Guard was called in to investigate a 48-foot sailboat that was reported to be adrift near Greys Harbor.

The crew of the Coast Guard cutter Barracuda discovered the sailboat more than 440 miles southeast of its last reported position. After an inspection of vessel’s seaworthiness, it was towed to Coast Guard Station Fort Bragg.

The owners were reportedly sailing from Hawaii to Bellingham when a storm rendered their vessel disabled and tore their main sail. The couple activated their emergency position indicating radio beacon and a helicopter crew from Coast Guard Sector Columbia River in Astoria responded to rescued them.

“The vessel was not under power and was completely at the mercy of the sea,” said Chief Warrant Officer Chris Ramp, the Sector Humboldt Bay command center chief. “The owners probably never thought they’d see it again.”

The active Coast Guard personnel are not the only ones with eyes on the coastline or the inland waters of the Northwest. There is also an active contingent of Coast Guard Auxiliary on duty to assist with educational programs and public safety.

Thomas Bliss, the Flotilla Commander for the auxiliary in Seattle, explained that the Coast Guard Auxiliary has been active for more than 79 years to provide navigational assistance and be watchful for polluters.

The Washington state auxiliary provides support to active duty personnel at events like SeaFair and at festivals and celebrations all summer across the state.

“We do not have punitive authority,” said Bliss. “Our job is to steer owners in the right direction, so they have the proper safety equipment aboard before they are not caught in a situation when it’s too late.”

More than 20 members of the auxiliary are available to support activities in Western Washington, while an equal number assist the Coast Guard with crowd control and education east of the Cascades.

On Lake Coeur d'Alene and Lake Pend Oreille in Sandpoint in Idaho, the Coast Guard is charged with enforcing regulations and reporting violations to the proper authority, according to Bliss.

The Coast Guard has one other duty in Eastern Washington. That is keeping recreational boaters a safe distance from the clandestine submarine testing that goes on at LakePendOreille, in the panhandle of Idaho. The lake has been the inland point for secret submarine research for more than 75 years.

The site was chosen because of the lake’s unique combination of 148 square miles of surface area, crystal clear water and one of the deepest lakes in the country. Depths in some portions of the pristine lake reach 1,150 feet deep.

The Navy's Acoustic Research Detachment (ARD) at Bayview, Idaho, which is some 375 miles from the ocean, is where new shapes and designs for submarine and surface ships are tested in ocean-like conditions far from watchful eyes of potential enemy vessels.

The subsystems are tested in a sub-scale environment that closely mimics the ocean.

The lake is deeper than Loch Ness. Its large size, clear water and quiet conditions provided by steep tree-lined shores and a flat muddy bottom, along with a constant chilly temperature under 100 feet, are all key factors that have made it such an attractive testing location for the US Navy since WWII.

The Coast Guard has a monumental task in District 13, from safeguarding recreational boaters on the Puget Sound to protecting some of the military’s most secret submarine research at a remote lake in Idaho.

Petty Officer Third Class Trevor Lilburn summed up the task, “It is a job we accept with the knowledge that we are protecting lives and doing our duty to maintain peace.”