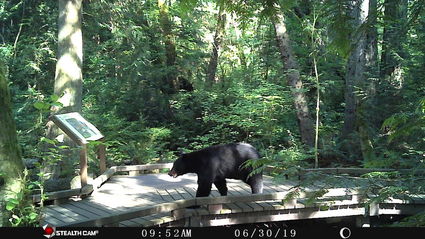 Closed circuit cameras captured images of a young black bear on a leisurely stroll though the NW Stream Center in McCollum Park on Sunday, June 28. The bear was spotted just eight minutes before the center opened for Visitors Day at the popular local attraction. Adopt A Stream Director Tom Murdoch said bear sightings are rare at the center because the animals use their sense of smell and hearing to avoid contact with humans.

An honored guest dropped in to pay a visit to the NW Stream Center last week. And his appearance created quite a stir among both visitors and staff.

Ironically, the young black bear paid his respects just before the gates opened at the center for Visitor’s Day on Sunday, May 28.

“It has been a year since we took a picture of a bear at the Northwest Stream Center,” said Adopt A Stream Foundation Director Tom Murdoch. “It is nice to know that wildlife are taking advantage of the great habitat we have here in the middle of the suburbs.”

The morning’s “visitor of the day” arr...