Not knowing was survivor’s worst part of breast cancer battle 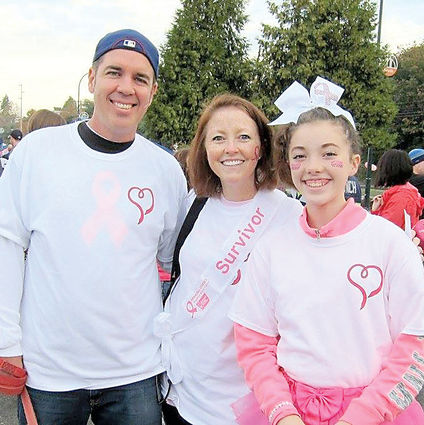 The Ferrell family has participated in the annual Making Strides 5K Walk/Run every year since Meagan was diagnosed with breast cancer in June 2010. Their daughter was in fourth grade when her parents tried to explain the effects of the surgery and treatment that her mother would be forced to endure to prolong her life.  Lindsay is now a senior at Archbishop Murphy High School with plans to attend Boise State next fall.

Meagan Ferrell knew something was wrong in June 2010 when a sharp pain woke her in the middle of the night.

She thought to herself, “This can’t be good.”

When she touched the source of her pain and felt a lump, she spent the rest of that night planning her own funeral.

“When I saw my doctor the next day, I was positive that I had cancer,” Ferrell remembers as if it were yesterday. “I had been seeing the same internist for 11 years. This was the first time he was not jovial and smiling.”

Her amateur diagnosis was correct. It turned out that the mother of a fourth grader had...