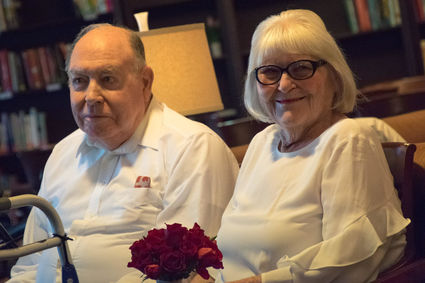 The bride came down the aisle with red roses from her beloved when Sharon Christensen married Alf Brandal at the Mill Creek Retirement Community on Bothell-Everett Highway in February. The couple had been sharing meals and long conversations together for more than a year before they decided to tie the knot at a ceremony attended by a small group of family members and most of residents in the senior community. Sharon said many of he women have gotten over their resentment of taking one of the most available bachelors off the market.

New faces  especially men  are a welcome sight for residents of the Mill Creek Retirement Community on Bothell-Everett Highway. So it was not surprising that the tall handsome gentleman who walked into the dining room caught the attention of Sharon Christensen.

When the man looked around the room for a place to have his dinner, Sharon called out to invite him to sit with the regular group of women she was seated with. He smiled and accepted her invitation.

“I had my choice of sitting alone or with a group of attractive women,” said Alf Brandal. “The answer was obvious.”

Alf said he joined Sharon for dinner that night and never left.

A few nights later, he picked two red roses from of a potted bush in the lobby of the senior community and sat by the elevator until Sharon came down for a meal.

“It was the first time a man had brought me flowers in 20 years,” Sharon said with a blush. “He was a true romantic.”

The happy couple was married in small ceremony in the dining room of the senior community Feb. 25 that included family and most of the residents from the building. Sharon remembers the small celebration following the ceremony was a bit unusual.

“At most weddings, people like to kiss the bride,” she said with a smile. “But after our wedding, the women in the building were lined up to kiss the groom. And they did it over and over again.”

Sharon explained that family on both sides urged them to get married. Her daughter told her she had been talking about “this man named Alf” for long enough and it was time to make it official.

Alf said his brother delivered the same message to him, with an exasperated message that ended with the question, “What are you waiting for?”

Sharon remembered that women in the building were upset with her when she and Alf first began to spend all of their time together. She had taken one of the most eligible bachelors out of circulation.

But the hostility quickly turned into happiness for the couple. The newlyweds were also the target of some good-natured teasing because of the difference in their ages. Alf is 80, four years younger than his new bride.

“That makes me the older woman,” Sharon said with a laugh.

The Washington native is the mother of four. She had been alone since her husband died 20 years ago. The bride described herself as an “empty shell” who had suffered from a severe case of heartache when she reached out to Alf.

Alf moved to western Washington at the invitation of his daughter. He had only been married to his wife for 14 years before she passed away.

“We both needed companionship. That’s all I intended,” Sharon said. “But companionship quickly turned to kissing.”

Although they spent virtually every day together, they avoided any conversation of marriage because Sharon was concerned that a change in her status would endanger her eligibility for Social Security. She also worried that she would not be able to remain at the senior community.

Her outlook changed when management informed her that she would not lose any of her benefits.

“We did not want to live in sin,” said Alf, who served as a congregational pastor after his 23 years of service in the U.S. Air Force. Sharon said her new husband had wanted to enlist in the Navy, but was turned down because he was too tall.

Alf moved to the United States from his native Norway in 1960 and had served as the pastor for a church in Cedar Rapids, Iowa until his daughter invited him to move in with her so he could spend more time with his grandchildren.

The bride she has often been forced to wait for her husband after meals in the dining room when residents ask Alf to “pray or meditate together” when they are in crisis.

Alf is a man of few words. But when he does speak, said Sharon, his words are filled with wisdom. Her favorite expression is her husband’s description of their relationship as “blessed.”

Alf followed his wife’s kind words with a few of his own, “We are the gift we’ve given to each other.”