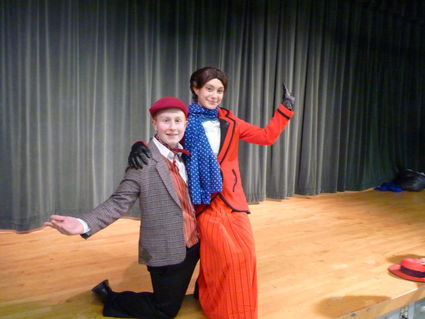 A gregarious Dash Beatty provides his lap for his co-star Sophie Erb during a rehearsal for the upcoming production of Mary Poppins by students from Heatherwood Middle School. Opening night for the ambitious undertaking will be Friday, March 22. Five performances have been scheduled over the last two weekends of the month in the theatre at Jackson High School. The curtain goes up on Opening Night and the following Thursday and Friday at 7 p.m. Matinees on Saturday, March 23 and March 30 are scheduled to begin at 2 p.m. A limited number of tickets will be available at the door.

The performers will be ready and the parents will be nervous when the curtain goes up on the Heatherwood Middle School production of Mary Poppins on Friday night, March 22.

“Yes, I’ve seen the film with Dick van Dyke as Burt the chimney sweep,” said a confident 14-year-old Dash Beatty. “But I really want to make the role my own. I want to add a special flair and my own walk that reflects who I am as an actor.”

Beatty will share top billing in the middle school production with Sophie Erb, who will play the title role with a smile and a nod that will set her apart from the screen...