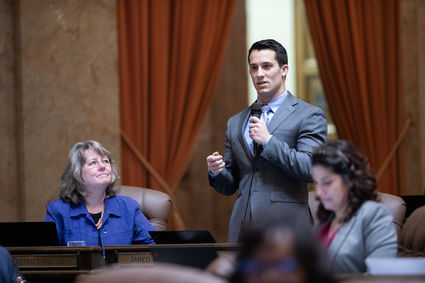 Jackson High grad and former Mill Creek City Councilmember Jared Mead introduced his first measure to the state Legislature on March 7. The freshman lawmaker proposed a measure that would help the environment by creating a viable market for plastics and other materials that would otherwise end up in landfills.

“Unless we do something, the cardboard, plastic and cans that you and I are used to recycling will fill up our landfills,” said Rep. Jared Mead (D-Mill Creek), who wrote House Bill 1543 to address the crisis.

“We’ve all seen the upsetting images of wildlife like birds, turtles and other fish with plastic garbage stuck around their throats or filling their stomachs,” Mead said during his speech on the House floor. “And we’ve all walked the beautiful Washington shores in the summer and had to be careful to avoid stepping on the broken glass or sharp plastic trash laying around.

The bill advanced with support from lawmakers in both parties, passing 64-32.

The measure is Mead’s first bill to pass the House. Mead did not stop with his first piece of legislation. On Tuesday, March 12, the state’s youngest lawmaker introduced a bipartisan measure that would allow people in Washington to give remote testimony to committees in the House of Representatives.

“This is about making our democracy accessible to everybody,” said Mead. “Washington is a big state, and it’s a day-long trip for millions of people to drive to and from Olympia to testify on a bill for three minutes. Remote testimony is also a great alternative for working people.”

House Resolution 4621 apparently has broad bipartisan support. A total of 58 other lawmakers are signed on to the bill as co-sponsors. It only takes 50 votes to pass a bill off the floor of the House.

“We know this idea works because the Senate is already using remote testimony,” Mead said. “Anything that brings more of constituents’ voices to Olympia is a good reform. This will mean more input from working moms and dads, people in rural Washington and other residents who can’t easily drive to Olympia to testify and take part. I can’t think of a reform that’s more fitting for the people’s House.”

Modern technology makes this switch easier than in years past, Mead said.

“I’m proud to bring this legislation before the people’s House,” Mead said, “because it uses market forces to achieve a common goal: a cleaner, healthier Washington state.”

The former Mill Creek City Councilmember is a graduate of Jackson High School and Heatherwood Middle School. He was elected to represent the 44th District in the state legislature in November.