By Maria A. Montalvo

From Scriber students: Another form of 'Light' | Arts & Appetite 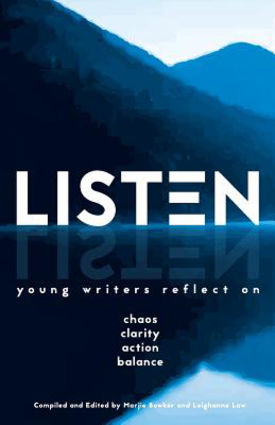 This past Saturday evening, more than 120 guests were treated to a remarkable performance for the Scriber Lake book release at Edmonds Lutheran Church.

Titled “Listen: Young Writers Reflect on Chaos, Clarity, Action, Balance,” this is the seventh in a series of published books of stories from Scriber Lake High School students, inviting readers to listen to the life experiences of teenagers here in our community.

Bowker said this book is “both deeper and lighter than any book we published so far.” The hope grows out of the depths of each story, and the “truth allows us to take positive steps,” said Leighanne Law, also from Scriber Lake, who worked with Bowker to compile and edit the book.

Each of the 10 stories in the book, and additional stories and songs presented that evening, highlight the transformative power of storytelling. Jenna wrote about learning of a terrible truth about her own father.

Joey’s story closed with him riding his bike down a hill in Edmonds, feeling the exhilaration of the wind and speed, after describing three suicide attempts. Adrien wrote in such a way that the reader felt the struggle of attempting to talk to a parent about gender identity.

Mindy’s words transported listeners to a space of dread and anxiety brought on by high school hallways. The full diversity of remarkable stories could not be covered in one evening, so be sure to get the book to learn about a father who gets arrested by ICE agents, and about a young man who found strength from an encouraging football coach.

The performance and the book were dedicated to the memory of beloved Scriber Lake teacher Liza Behrendt.

Fellow teacher and mentor Chris Brown read a stunning story written by student Ariel Sanabria about Behrendt’s memorial service, describing how Liza showed him “a horizon that reached no limits.”

The brilliance of how Sanabria crafted the story is balanced by the heartfelt words portraying the deep and lasting impact a teacher like Liza can have on students.

This performance also featured a new facet to the Scriber Lake’s writing program  music. Scriber is attempting to establish a formal music program, and already student musicians are working with well-known singer-songwriters Scarlet Parke and Dimiter Yordanov once a week to compose original songs based on the stories.

Thanks to a grant from Safeway, Scriber Lake has been able to engage these professional musicians.

Two of Scriber’s student musicians, Yahaira and Bailey, performed original songs that moved the audience to tears and to laughter. Yahaira praised storywriter Mindy, saying she “loved the way she put the words together,” and then hauntingly sang her own words: “Blue the ocean was and now so am I.”

Parke and Yordanov also captivated the audience with five songs to open and close the show. and expressed their gratitude for being able to work with such moving young writers.

Said Yordanov: “It was inspiring to see you have the courage to share your stories; you have been a huge inspiration to me and my songwriting.”

Two student authors from prior books also read at the event and shared where they are now. Kelly is nearing graduation (thanks to the support of an anonymous Edmonds couple supporting her education), to become the “first person in her family to get a four-year degree,” in order to become a teacher, while Carolina has started a successful baking business and is about to earn her AA in baking from Edmonds Community College.

The Scriber Lake student authors and their teachers will present another reading, at Café Louvre in Edmonds, 6 p.m. Tuesday, March 12. Books can be purchased for $10 at Scriber Lake, Edmonds Bookshop, or for $15.95 on Amazon.com.

For more information and a full calendar of events, visit facebook.com/steepstairspress. Those who would like to learn about or donate to the Scriber Lake writing program or new music program can contact Scriber Lake office manager Chris Kratz at Kratzc@edmonds.wednet.edu.