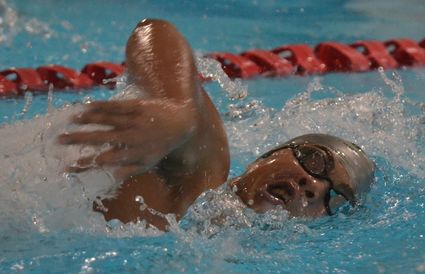 In a battle between two undefeated teams, Kamiak came out on top over Jackson to claim the Wesco South boys swimming championship.

The Knights won five out of the eight individual events and swept all three of the relays to win 107-63 in the final regular season meet for both teams Thursday, Jan. 24, at West Coast Aquatics Pool in Mill Creek.

“I’m happy with how he’s swimming right now,” Jackson coach Drew Whorley said of Limberg, who placed fourth in the 100 breaststroke and ninth in the 200 individual medley at last year’s state meet. “He swims with a lot of heart.  He carries a lot of school pride. He’s a great leader for all of our kids. Everybody kind of rallies around him and has a lot of respect for him.”

“Kamiak is an exceptionally deep and really talented team,” Whorley said. “Today we swam against a team that is better than we are right now.”

The Wolfpack’s younger team members have impressed Whorley throughout the season.

“For their age, they swim with a lot of confidence,” the Jackson coach said. “We’ve had a lot of close meets and we’ve come in ready to swim those and today we swam against a team that is better than we are right now.  Having relatively talented freshmen and younger kids, you want them standing behind the blocks believing that they can be successful and that’s what we’ve been working on.”