Retirement is not part of her vocabulary 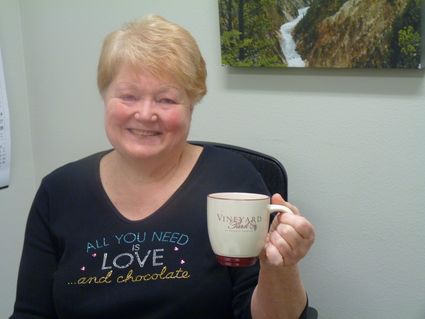 Vintage resident Teresa Logsdon raised her cup of coffee to toast the efforts of her colleagues at the Mill Creek Senior Center for scheduling events that are vital to residents of all ages. The grandmother describes herself as a rebel who thrives on changing accepted norms to improve the lives of her own children, grandchildren and neighbors at Vintage.

Teresa Logsdon has been a fixture at the new Mill Creek Senior Center since the facility opened its doors in the lobby of the Vintage Community in the northeast corner of Mill Creek.

She may be physically at the senior center, but the only way to find the high-energy grandmother is to catch her as she dashes between negotiations between the desires of the senior center and the residents of her adult community.

“Sitting still is not part of my DNA,” Logsdon proclaimed. “It probably started when I was child on my grandparents farm in Iowa and has been my way of life every day since.”

Given the opportunity, Teresa will outline the inequalities of the ‘unjust’ healthcare system in the United States just as easily as she can lay out details of how she survived as an abused wife in a time before the topic of domestic violence was ever discussed in public.

Born as the fifth of eight children in a devout Catholic family, her birth order gave Logsdon the skills to communicate with her older siblings while she served as a caretaker for the younger ones.

Her parents were both well-educated professionals who lead by example. They both instilled the need for advanced education in each of their children. Unfortunately, had had no money left to send Child No. 5 to college.

To make matters worse, Teresa realized too late that she had married to a man with violent tendencies who had grown up in a home where with domestic violence was normal. So she packed up her two young children and moved out. Logsdon worked full-time to support her son and daughter while she attended night school to eventually earn her degree in accounting.

“Something practical,” she explained. “It seemed like the logical, Catholic thing to do. Probably the only Catholic thing I did at that point of my life.”

A woman, she said, who walked out on her husband was not just unusual during the 1940s. Members of her own church considered her actions a sacrilege.

After putting in four years at an accounting firm in Iowa, Logsdon packed up her two kids and accepted an invitation from a friend to settle in St. Louis, a three-hour drive from her parents. Continuing to work full-time to support her children, Teresa began a fulfilling career of providing accounting services to non-profit organizations in the Archway City.

“I probably could have earned more money in the private sector, but I had a problem with directors and CEOs would literally come in an ask me to ‘fix the books’ to make them look better to donors or to the stockholders.”

Teresa has apparently passed her ethical gene to her children.

Her daughter, Valerie Baker, lives in Bothell with her husband and Logsdon’s two grandchildren. She is a music teacher for students with special needs at Canyon Creek School in Bothell. Teresa proudly describes Valerie and her husband as “the ultimate nerds.”

Her 38-year-old son, John Slattery, is a middle school teacher who is working on an advanced degree in Linguistics.

Teresa was convinced to move away from her Midwestern roots and all of her friends to move in with her daughter to provide childcare for her grandchildren. It did not take long for the energetic senior to realize that she needed to move out of her daughter’s home if she wanted to maintain the friendship they had enjoyed.

“We both want what’s best for the kids,” she said with a whimsical flair. “But we have different methods of parenting. Moving out was best for everybody.”

Logsdon discovered that she had lived on her own far too long and enjoyed her independence too much to force her opinions on others. She chose to live at Vintage to be close to her daughter.

But not too close.

“My motivation is to provide choices for my children and their children so they can choose to make this world a better place,” she concluded. “I had mine. Now it’s time for them to go out and make a difference.”