Year of turmoil in City Hall ends with promise of stability 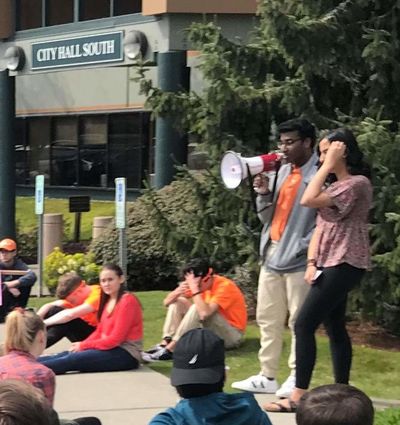 Students from Jackson High School seized the opportunity to rally against gun violence during 2018. Students walked out of class in March to mark the one month anniversary of the school shooting in Florida, then took to the streets again in May to stage a protest in front of City Hall.

The 2019 New Year in Mill Creek began very much like it did in 2018, with a vacancy on the City Council and a list of potential applicants who hope to fill the open seat on the city’s legislative body.

The difference this year is that the selection process will be shadowed by controversy.

A year ago, the six remaining members on the City Council emerged from an executive session at its first meeting of the year with a plan to expedite the process required to fill the vacancy created by the resignation of Councilmember Sean Kelly.

For months, the one-term lawmaker had failed to resign his position on the council despite moving his primary residence from Mill Creek to Snohomish.

This year, the resignation was much less contentious. The council vacancy was created by the election of 27-year-old Councilmember Jared Mead to the state Legislature. Mead joined former Mill Creek Mayor John Lovick in Olympia this week to represent the 44th Legislative District.

The controversial element in this year’s election process will be the debate whether the council should appoint a resident to the open seat who represents the changing demographics of the city.

A number of concerned citizens have spoken to the City Council and written letters to the editor of The Beacon calling for the appointee to be someone other than a middle-aged white person.

Five of the remaining councilmembers are Caucasian men. Mayor Pam Pruitt is the only “minority” on the council. In reality, the mayor is actually part of the majority. According to the latest census figures, women represent more than half of the population of Mill Creek.

Incumbent City Councilmember Mike Todd has a different perspective on the issue. He said the current council is diverse in its representation of members from both the private and public sector, from both labor and management, and representative of neighborhoods and community organizations.

“For me, I don’t label people by gender, race, ethnic background or other traits,” Todd wrote in his response. “I will be looking for the most capable candidate to fulfill our duty to enhance the prosperity and viability of the city overall.”

Todd is one of four councilmembers who will have terms that expire in 2019. He declined to comment on his future with the council.

The news cycle last February was dominated by the defeat of an Everett Public Schools bond that would have provided $330 million to fund a 19th elementary school and a fourth high school to cope with the growing population in the southern portion of the district as well as overcrowding at Jackson High School. The measure was approved by a majority of voters in the vast district, but fell short of the required 60 percent super majority required by state law.

The EPS board created an ad hoc committee to develop recommendations to cope with the overcrowding.

Voters did approve the Educational and Operations Levy in the February election that only required a simple majority of the votes cast.

In the same week as the election, members of the Mill Creek City Council chose 22-year Mill Creek resident John Steckler from a crowded field of applicants to fill the council vacancy.

Students at Jackson High School walked out of class on March 14 to commemorate the one-month anniversary of the school shooting in Parkland, Fl. that left 17 students and members of the staff dead at the high school in Florida on Valentine’s Day.

The City Council wrapped up a series of strategic planning sessions in April to set the stage for decisions to cope with the financial health of the city with guidance from City Manager Rebecca Polizzotto.

The middle of the month marked the last time Polizzotto would be seen in her office at City Hall before her prolonged absence became an issue with department managers.

April was also the month the Robotics Team from Jackson High School competed in the national FIRST Robotics competition in Houston. The team eventually finished third out of 154 entrants in the prestigious contest.

Students at Jackson continued their protest against gun violence in May with a march from campus to Main Street through Mill Creek Town Center. This was also the month that parents learned that 650 students would be impacted by the decision of the EPS board to adjust to elementary school boundaries.

May marked the opening of the Mill Creek Senior Center on the first floor of the Vantage residential community on 133rd Street SE. Sadly, May was the month that Mill Creek’s first K9 officer, a black German shepherd named Rasko, died from heart failure less than a month after he retired from active duty.

The annual Mill Creek Festival dominated the pages of The Beacon during July, with photos that featured Elvis impersonators and animal competition.

Controversy made its return to City Hall in August when members of the city staff were issued a cease and desist order regarding a second whistleblower complaint filed against Polizzotto.

On the bright side, Interim City Manager Bob Stowe braved the hot weather to join an impressive list of dignitaries for a ceremonial groundbreaking ceremony for the long-awaited repairs to the sinking roadway along 35th Avenue SE.

The City Council delayed a decision on Polizzotto’s future until the end of August to allow the city attorney time to analyze the results of an investigation the council had ordered into allegations filed against the embattled city manager. The end of summer was also when a citizens group renewed its charges of election fraud over the fact that Kelly’s name had been allowed to appear on the ballot.

The new school year began in September with teachers in Everett retaining their place as the highest paid educators in the state. The new contract avoided the need for a strike by teachers that delayed the start of school in districts across the state.

The latest round of drama in City Hall came to a close in October when the City Council voted to terminate the three-year contract Polittozzo had signed in July of 2015, but not before Mayor Pruitt made an impassioned endorsement of her friend and her accomplishments.

Later in the month, the EPS board endorsed a plan to give voters in the district another opportunity to vote on the construction bond in 2020. Lawmakers from Mill Creek and south Snohomish County met with members of the Temple Beth Or community in Everett to show support for the Jewish community in the aftermath of the shooting that killed 11 worshippers at a synagogue in Pittsburgh.

Following their election victories, Mead and Lovick renewed their pledge to reform state law that requires a 60 percent super majority to approve school bond issues. Both lawmakers promised to make the measure a priority when the legislative session began in January.

The cost of living went up for Mill Creek residents in December when the City Council approved a boost in the Emergency Medical Services (EMS) portion of the local property tax bill and doubled the city charge to property owners to maintain and operate the Surface Water infrastructure. The increases were expected to cost the average homeowner less than $100 per year.

In its last action in 2018, the City Council approved a recommendation from Stowe for the process to fill the vacancy on the council. Public hearings are expected to take place in February, followed by a swearing in of the new councilmember.