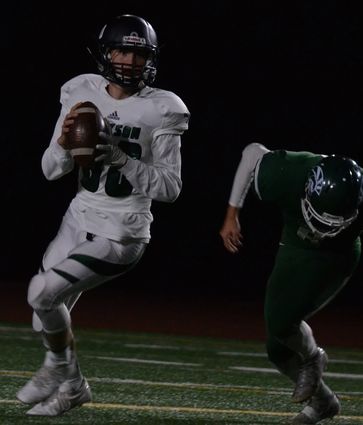 Jackson didn’t get a victory in its final game of the season, but the Timberwolves gave it their best effort.

Senior running back Capassio Cherry rushed for 265 yards and four touchdowns to lead Edmonds-Woodway to a 33-13 victory over the Wolfpack in a nonconference football game Thursday, Nov. 1, at Edmonds Stadium.

The windy conditions proved to be far more conducive to the Warriors’ ground game than to Jackson’s passing attack.

Jackson assistant coach Ryan Simmons saw a team that was eager to hit the gridiron despite being out of the playoffs.

“The guys came out ready to play that game,” Simmons said. “They were excited to have that last chance, one more time to play. The weather made things a little difficult. We’re more of a passing team. The wind made it hard to throw.”

The Jackson defense picked off two passes in the first quarter, one of which led to a 30-yard field goal and a 3-0 lead for the Wolfpack.

Edmonds-Woodway’s offense finally found its groove and Cherry scored on runs of 26, 44 and 55 yards and Ben Grimes returned an interception 89 yards for a score.

Jackson closed out the fourth quarter with a 35-yard field goal and a Nick Walsh touchdown run. Walsh finished with 70 yards on 19 carries.

“I thought we did a good job of containing Cherry,” he said. “It just takes one big run. He had a couple of those that sealed our fate.”

The Timberwolves (4-6) will see a significant turnover with the graduation of 20-plus seniors, include key players on the offensive and defensive lines, the secondary and the receiving corps.

“There are some big shoes to fill,” Simmons said.

Among the returns are Clark and wide receiver Garrett Holden, who saw action in the Wildcat formation.

“I think we will have a good foundation,” Simmons said.

Jackson also will have a new head coach after longtime coach Joel Vincent stepped down at the end of the season.