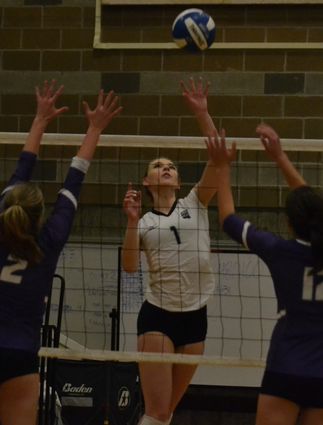 Glacier Peak and Jackson both came up short in their bids to advance to the state volleyball tournament.

The Grizzlies lost a pair of winner-to-state matches to Issaquah (3-0) and North Creek (3-1) at the 4A Wes-King District tournament Saturday, Nov. 10, at Bothell High School.

Glacier Peak opened tournament play with a 3-2 victory over Bothell before losing to North Creek 3-2 in the quarterfinals. The Grizzlies then beat Skyline 3-0 and edged arch rival Jackson 3-2 to advance to the final day of the tournament.

Jackson coach Mindy Staudinger was glad that her team left it all out on the court.

“We battled for every point against Glacier Peak,” she said. “We had three opportunities for match. We weren’t able to capitalize. At the end of the day, it went the other way.”

The Wolfpack lost its first round match 3-2 to Mount Si after jumping out to a 2-0 lead. Staudinger was concerned about her team’s play.

“We did have a good conversation with the team about competing 100 percent,” Staudinger said. “They really rallied together and said ‘we’re committed to giving 100 percent and having no regrets.’”

Jackson defeated Eastlake 3-1 in the consolation bracket opener, which sent the Timberwolves into a showdown with Glacier Peak.

“I told them they should be proud of themselves,” Staudinger said. “They gave everything that they had.”