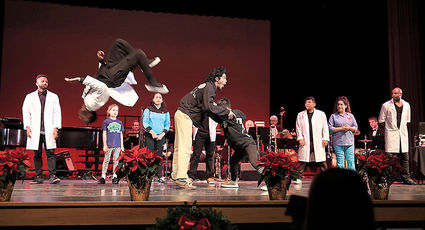 Break-dancers performing at the 2016 Christmas Spectacular. There are plenty of music and dance performances to be seen at the 2018 showing.

Many in the area know Dr. Sanford Wright as a neurosurgeon in Snohomish County and as the son of Dorothy Jayne Wright who taught dance to generations of Mukilteans at the old Rosehill School.

While Dr. Wright’s work is certainly difficult and time consuming, he said he loves the holiday season and helping those less fortunate, and for the 18th consecutive year, is producing and directing “The Christmas Spectacular,” a large holiday event described as “a celebration of life in our community over the holidays while helping others less fortunate than ourselves.”

Proceeds from the event go to the Make a Wish Foundation of Alaska and Washington.

Wright said there are a lot of moving pieces during the performance, but they all tie into each other.

“It’s a celebration of life, but it’s also a celebration of freedom,” he says. “That ties into the Everett High School ROTC and the National Anthem. We can’t celebrate life without having our freedom.”

Historical events will be covered, such as the War of 1812 and the Holocaust.

“There’s a piece I like to call ‘freedom awareness’ about the Holocaust, and it has the music from ‘Schindler’s List,’” Wright said. “That helps to remind the audience that if there’s not freedom, there’s no Christmas show.”

Billie Wildrick, a director who has had shows performed at the 5th Avenue Theatre in Seattle, will be directing the vocal performances from “The Greatest Showman.”

Wright said Jack Klitzman, the music director of the Seattle Theatre Group, is directing the show’s band throughout the evening.

There also will be musical performances of Michael Jackson’s music, Wright said.

“Admittedly, I wasn’t a huge fan of his originally, but I have a new appreciation,” he said. “He donated millions to Make a Wish and to Africa.”

Wright said that ties in to the show because there will be a presentation from Sheila Murphy, a nurse at Providence Regional Medical Center, who does mission work with Rwandan women dealing with pelvic diseases after giving birth.

Wright said Peter Drury, vice president for Mission Advancement for Make a Wish Alaska and Washington, will talk about what Make a Wish does, so the audience knows what their money and donations are doing.

“A 20-year-old girl, she’s a quadriplegic and has muscular dystrophy, but she can sing, and will perform ‘Stand by me,’” he said.

Wright said his flair for big events like this comes from his mother, who taught dance at the old Rosehill School in Mukilteo back in the 1950s. Now, there’s a dance studio and foundation under her name, Dorothy Jayne. The foundation is presenting “The Christmas Spectacular.”

“My craziness comes from her,” he said with a laugh. “My dad was a Rotarian, so my need to help others comes from him. I really can’t help it. This is something that’s really important.”

Admission is $20 and five cans of food.

Tickets are available at http://www.brownpapertickets.com/event/3116058.

For those unable to attend in person, Puget Sound Video will stream the event online.

More information can be found at thechristmasspectacular.com.