Flags along the waterfront pay tribute to military veterans 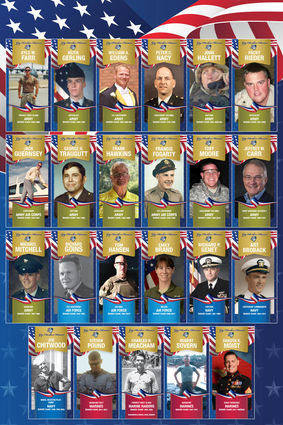 Each flag has its own story of patriotism. Each banner tells an intimate tale of dedication and sacrifice by a cherish individual.

As a group, the display of flags long the waterfront in Gig Harbor expresses the admiration local residents hold for those who have left the community to defend the freedom that binds all Americans.

The display of flags currently flying along the waterfront in Gig Harbor was designed to be an opportunity for families to honor sons and daughters, mother and fathers or beloved neighbors and members of the community who have served, or continue to serve, in the Armed Forces.

Mary Desmarais admits the flags were not an original idea, but something she knew would be adopted by the Gig Harbor community as it’s own.

The executive director of the Gig Harbor Waterfront Association was introduced to the banners while attending a conference this year in Kansas.

“My first thought was that our organization does not do enough to honor veterans,” Desmarais recalled. “This was a program that would not only honor those who served, but an opportunity to provide for those who continue to live with the scars from their service.”

Mill Creek resident Chuck Wright, who served with the Navy in Korea, said “(This would be a)very nice tribute for those who dared to service and for their love ones” because the flags would be seen by a lot of people if the were flown on Mill Creek Boulevard, and on along Main Street in Town Center.

Each banner features a photograph of a service man or woman. Each is sponsored by a member of the community who wanted to show their gratitude in a public venue.

One of the banners was purchased by Heidi Roundtree to honor her father, Art Broback, who served in the Navy for 20 years. His enlistment included time across the Pacific during the Korean War.

Brobeck will turn 88 in February.

“Service to his country was always important to our dad,” reflected Roundtree. “When we met Mary (Desmarais) at a Farmers Market last summer and learned about the flags, we thought it would be a nice thing to do for our dad. It was a natural.”

When the flags went up, Heidi and her family brought their father to the Gig Harbor waterfront to surprise him with the flag that had been made in his honor.

“His eyes just lit up,” she remembered. “He asked us what we had done to deserve such an honor.”

Roundtree told her father the family has always been proud of his service. The flag was a way to show the family’s admiration for their patriarch.

The proud daughter said the honor was especially important to her father because there are so few of his contemporaries still around for him to share stories with. Broback was in construction and developed University Place. He went on to serve in the state legislature.

Mickey Traugutt made the decision to honor other business owners in Gig Harbor by sponsoring 11 of the flags.

“It was important to me that people know that some of the people they know and deal with on a regular basis are veterans,” said Traugutt. “It does not matter if they were combat veterans or stayed home to protect American soil, these brave individuals deserve to be honored.

“It was the very least I could do.”

Traugutt is co-owner of Washington Patriot Construction. He said he was glad to see Gig Harbor “step up to the plate” to do more than just hold a ceremony to honor veterans.

Proceeds from the sponsorship of the flags, Desmarais said, will be donated to the Permission To Start Dreaming Foundation, a local non-profit organization that provides assistance to soldiers who suffer from Post Traumatic Stress Disorder (PTSD). Each sponsor pays $200 for the banner. The banners are made locally at a cost of $150, with the difference donated the foundation.

The impressive gauntlet of flags were hung in September before the annual Race for a Soldier and are expected to remain up until Veteran’s Day in November.

Since its inception in 2011, the annual 5K Race for A Soldier has provided almost $300,000 to national and local programs that provides tools for soldiers to give themselves Permission To Start Dreaming, according to the organization. The event on Sept. 15 next year will feature a 10-mile course as well as the 5K for individuals for those who prefer to walk or run the traditional route.

The PTSD foundation was created by Leslie Mayne, in part, to honor the memory of her son Kyle, who took his own life in a hotel room in Baltimore after returning from his deployment in Iraq. Leslie sponsored a flag on the waterfront to remember her son.

“It means so much to me to honor members of the military in this manner,” said Mayne. “When you honor one veteran, you honor all veterans for their service. It says so much about the people of our community.

“It’s hard to describe my gratitude.”

Mayne was with friends and relatives in Texas when she received the tragic phone call about her son. He had been released from treatment for symptoms of PTSD and had been living on the East Coast near his father.

“He was my baby and my best friend,” she recalled in a soft voice. “The VA (Veterans Administration) hospital had been treating him with drugs, then released him without any real plan for him to cope with the nightmare he had been through.

“I knew there had to be a better way.”

Mayne knew she had to return to the Northwest to “do something to honor my son’s memory.” Her friends in Texas filled the tank of her car and provided the saddened mother with gift cards to make the long ride home more tolerable.

Kyle’s mother had worked with non-profit organizations for years and was familiar with the many details it required to stage an event to fund her dream of an association that could honor the soldiers who paid the ultimate sacrifice to defend their country.

“The Race For A Soldieris more than a run through the scenic Pacific Northwest,” said Mayne. “This is a race run for hope, for support and a better future for the men and women that serve our country. This is race was founded to honor a brave son whose life was cut short, like too many of our soldiers today.”

The race has attracted thousands of runners and walkers in the past eight years.

“As heavy as this burden might seem, as monumental as this epidemic is, we believe we can make a difference,” Mayne explained. “The Permission To Start Dreaming (PTSD) Foundation knows that our soldiers need our help and believes we can change the tide.

She said communities make a difference in the fight to stop the epidemic that haunts soldiers when they return from deployment.

“Race For A Soldier is our anchor of hope” she concluded. “Our way to show support and raise awareness and a chance to raise valuable funds that will ensure more soldiers get the help they need before it's too late.”

The flags along the waterfront in Gig Harbor are a vivid reminder of the sacrifice families have made to preserve American freedom. The program offers a chance to see the faces and know the names of members of the military who deserve to be honored and remembered.

“I could see the flags to honor veterans from Mill Creek displayed along Main Street in Town Center,” said Wright. “There are never enough ways to honor veterans of our military. Especially those who made the ultimate sacrifice.”