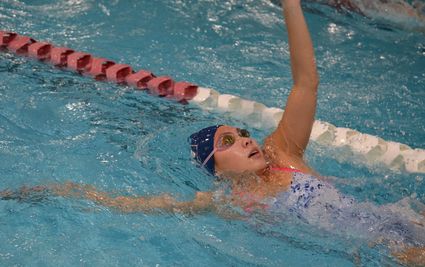 Jacksons Mia Chang works on the backstroke during practice at West Coast Aquatics in Mill Creek. Chang advanced to the finals in the 100 backstroke and 200 individual medley at last years 4A state swimming championships.

As a freshman, Jackson’s Mia Chang set and achieved some lofty goals.

“Last year one of my goals was to get my state cuts in all the events, all the individual events,” Chang said.

Then at the 4A state swimming championships, Chang made an impressive debut, finishing third in the 100-yard backstroke and fifth in the 200 individual medley.

Chang is back and better than ever.

Less than a month into the regular season, Chang already has recorded state qualifying times in all the individual events except the 500 freestyle. She also helped the 200 medley relay team record a state cut in the first meet of the season.

“It’s pretty remarkable,” Jackson coach Drew Whorley said of the sophomore standout. “I’ve seen a handful of athletes do it.”

Chang plans to compete in the 100 backstroke at the state meet. Last year’s champion Emma Frey of Mount Vernon graduated and second place finisher Rachel Nguyen of Newport is now a senior.

“I’m definitely going to do the 100 back at state,” Chang said. “I’m actually kind of thinking about switching it up and maybe swimming something else other than the IM.”

Chang and Nguyen know each other well since they are teammates on the same club team. A showdown between the two in the 100 backstroke finals seems to be a distinct possibility with a possible state title on the line.

“That definitely is a goal of mind  to win a state title,” Chang said.

Teammate Heidi Ly also swam in the same two events as Chang at the state meet. Ly placed sixth in the 100 backstroke and was 11th in the 200 individual medley (consolation finals).

Ly has a state cut in the 100 backstroke and is close in the 200 individual medley.

“I feel like this year has been a lot different than the past couple of seasons in both club and high school,” Ly said. “I feel like we’re doing a lot more yardage.”

Whorley is confident Ly will pick up her state cut in the 200 individual medley.

“You can tell how much work she’s did in the offseason,” he said. “She’s faster at this point in the year.”

The other two spots in the 200 medley relay have yet to be determined. Jackson has several options.

“There’s going to be a lot of competition for the other two relay spots. We’ve got a lot of people moving around,” Whorley said.

“I think as long as we collaborate and work together it’s going to work out,” Ly added.

Jackson’s plans to focus on the 200 and 400 freestyle relays and the hope is to secure state qualifying times for those relays before the district meet in early November. 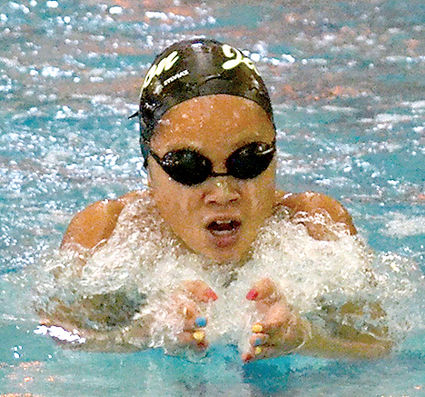 Jacksons Heidi Ly swam the breaststroke portion of the 200 individual medley at a recent meet against Mariner at Kamiak High School.

Another positive development for the Timberwolves is increased numbers for diving. Jackson has five divers out and two score points for the team.

“It’s a first for us,” Whorley said. “We’ve had a diver in the past. We haven’t had one that can compete at the varsity level. We’ve got two right now and a third that’s trying.”

The Timberwolves’ 95-90 victory over Shorecrest can be attributed in part to the team’s divers.