Council puts an end to the drama at City Hall 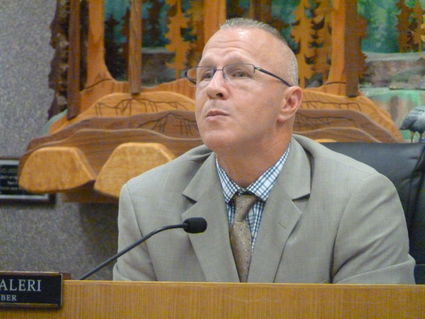 Members of the Mill Creek City Council terminated the employment of City Manager Rebecca Polizzotto on Tuesday, Oct. 2, but not before a highlight reel of the changes she brought to the city were reviewed by one of her dearest friends.

Mayor Pam Pruitt read a prepared statement to the council after a motion had been made and seconded to remove the controversial city manager from the position she had held since July of 2015.

“It is unfortunate Mrs. Polizzotto will not be part of our city government in the future so she could build on her many past successes here,” Pruitt said.

Pruitt praised Polizzotto for her ability to pull the city out of the multi-million-dollar deficit she faced when she began her tenure. She mentioned the City Hall campus, the Farmers Market and the new Senior Center as part of the legacy Polizzotto will leave behind.

The other six councilmembers were more reserved in their comments when they emerged from an extended executive session. The council voted unanimously to approve the separation agreement that will pay the city manager six months of her annual salary of $172,000 and extend her benefits for six months.

“None of us shared the same feelings as the mayor,” Councilmember Vince Cavaleri told The Beacon. “The mayor was entitled to make her statement. We just do not agree with her on this matter.”

Cavaleri said there will be a time and place to discuss the rationale behind the council’s decision to fire the city manager. He did say every councilmember was given an opportunity to speak on the proposal during the executive session.

The separation agreement will also dismiss the $1 million legal action an attorney for Polizzotto had filed with claims of breach of contract, defamation and indifference.

“Personally, I’m just glad to have this issue in the rearview mirror so the council can focus on infrastructure and the complex budget we need to approve by the end of the year,” Cavaleri said following the meeting. “We took the proper amount of time to resolve this matter appropriately.

“We were open to any option that would bring this issue to a conclusion that was acceptable to all parties.”

Cavaleri declined to comment on the loud voices that could be heard in the chambers while the council was in an adjacent room for the executive session.

“Sometimes you have to speak loudly to be heard when you’re in a room with six other people and our attorneys,” he said with a smile. “But I am glad we were able to come to a conclusion before it became personal.”

He did say the process was an example of how issues should be handled.

The action did not come fast enough for some members of the public. Former Councilmember Mary Kay Voss admonished the council during the previous meeting, saying councilmembers have known what needed to be done for six months.

Voss was not in attendance at this week’s meeting to see the results of her efforts.

The council had voted to extend the paid administrative leave for Polizzotto an extra week to allow time for City Attorney Scott Missall to contact the attorney representing the city manager to resolve the matter. The city attorney also was asked to draft a resolution to terminate the final portion of the three-year contract Polizzotto signed when she accepted the position with Mill Creek in 2015.

Polizzotto has not been seen in City Hall since mid-April following separate investigations into charges she had misused city-issued credit cards and that she used intimidation tactics to create a hostile work environment for employees in City Hall.

She had initially used sick time to cover her absence, claiming to have bronchitis.

Longtime Councilmember Mark Bond turned to members of the city staff at the Tuesday meeting to thank them for confronting the “unique challenges” that have dominated City Hall since Polizzotto arrived three years ago.

The credit card charges stemmed from a state audit that exposed Polizzotto’s use of those cards to purchase alcohol in violation of city policy.

In other action, the council also accepted the offer of Interim City Manager Bob Stowe to stay in his post until a replacement can be recruited and hired. Stowe had already served one week past the expiration of the short-term agreement he signed four months ago.

The contract calls for Stowe to earn $275 per hour for an average of 20 hours of work per week. Stowe did not say whether he would be interested in returning to the post he had previously vacated.

“Bob likes what he does right now,” Cavaleri said. “He comes into a situation, evaluates it and he solves it. Then he moves on.”