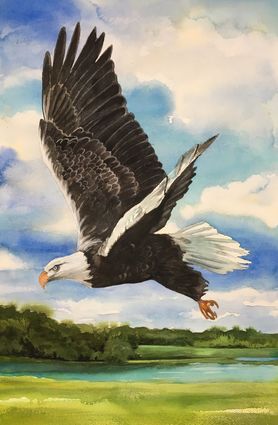 The poster for the 2018 Puget Sound Bird Fest is Molly Murrahs Winged Wonder.

Molly Murrah has been named the winner of the 2018 Puget Sound Bird Fest Poster Art Contest with her entry “Winged Wonder.” The piece was selected by a jury from among 14 entries and will be featured on the promotional poster for the 2018 event, which will be held Sept. 14-16 in Edmonds.

“Winged Wonder” depicts the bald eagle, an iconic Northwest species and the country’s national bird. The bald eagle is also the theme of this year’s Puget Sound Bird Fest. “Winged Wonder” was selected for its technical excellence, a landscape that is reminiscent of the Edmonds Marsh, and bright colors that the contest jury felt would catch people’s eyes as they passed the posters on the street.

Murrah says that the painting was inspired by an experience she had during her first weekend in Washington at a hillside cabin overlooking Hood Canal.

“Looking out the window, I said to myself, ‘I hope I get to see an eagle while I’m here.’ At that exact moment, two eagles took off and flew right in front of me no more than 40 feet away. It was a thrilling, magical moment  a sign that moving to Washington from New York was an auspicious move. When Bird Fest’s focus this year was on Pacific Northwest eagles, I had to paint this wondrous bird, hence the title.”

The Puget Sound Bird Fest Poster Art Contest is held each spring to select a piece of original art to be used for the festival’s promotional poster. Sponsored by the Edmonds Arts Festival Foundation, the winning artist is awarded a $200 prize.

Murrah is an experienced watercolor artist and freelance graphic designer, who has lived and worked in the Seattle area since 1982. She started painting in 2001, and has studied with many well-known instructors.

Presently she teaches classes and workshops at Daniel Smith Artists’ Materials in the Seattle area and in local galleries.

The Puget Sound Bird Fest celebrates birds and nature on the shores of Puget Sound with speakers, guided walks and field trips, boat tours, exhibits, and educational activities for children and adults.

For more information and details on upcoming events, go to www.pugetsoundbirdfest.org or contact Jennifer Leach at 425-771-0227 or jennifer.leach@edmondswa.gov.