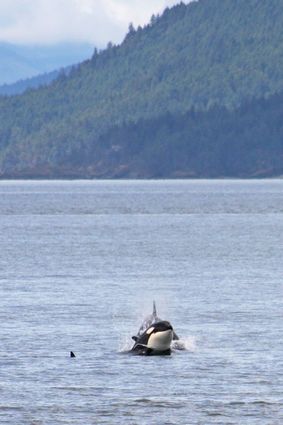 Who knew that the alder plank salmon served at one of the fine eateries in Mill Creek could pose a threat to the existence of killer whales and other mammals that depend on salmon as the foundation of their diet?

Environmentalists from Tacoma to Bellingham agree that the choices consumers make when buying fish at the seafood counter at their local grocery store and order in restaurants can have a direct impact on native salmon and the marine mammals that depend on salmon as the basic element of their diet.

Using disposable containers for take-out orders is literally taking food out of the mouths of some of the most iconic residents of the waters along the coast of Western Washington, according to Sam Hain, an environmental specialist with the Pierce County Conservation District.

“The situation would correct itself in 50 years, if we had the ability to not interfere with the food chain that begins with the salmon that are native to the Puget Sound,” Hain said. “But, of course, that is not possible. So, we need to think twice about our habit of disrupting the segments of the environment that feed directly into our waters.”

Hain said that the Conservation District has joined the Ocean Friendly program that works with restaurants and public venues to reduce the pollutants that flow into the Sound. Restaurants that participate in the program have limited or reduced the use of expanded polystyrene (aka Styrofoam) and use only reusable tableware.

“Consumers can help too, beginning with ordering vegetarian or vegan items from the menu when they dine out,” he explained. “Choose sustainable seafood. Muscles are sustainable. Tuna is not.

“If you must order seafood, always choose wild caught.”

At home or at work, Hain recommended that people concerned about the future of the Sound could purchase LED lighting and Energy Star appliances.

“The energy efficient and environmentally-friendly choices will actually pay for themselves in a very short amount of time,” Hain said with a broad smile. He added that the Conservation District has been working with Surfrider International to implement Ocean Friendly programs at the Point Defiance Zoo and Aquarium and throughout the Metro Parks in Tacoma.

According to Surfrider, here are 5.25 trillion (with a T) pieces of plastic in the ocean that will never biodegrade, with billions more added every year. Hain said the term “biodegrade plastic” is misleading because it is designed to breakdown with high temperatures.

“The open ocean is cold,” said Hain. “The plastic that ends up in the waters of Commencement Bay could survive for centuries and end up on a beach somewhere in the South Pacific.”

The district, he said, is also working with the city of Tacoma to limit the amounts of pollutants that enter the Sound from storm water runoff.

“We need to rethink our choices,” said Rachel Easton, education director for Harbor Whalewatch. “Three-fourths of the pollutants that run into the Sound are not from the oil spills we see on the evening news.”

The Harbor Whalewatch organization provides education to schools and at public events throughout the region.

In addition to conservation measures, the native Orcas and salmon would benefit from a reduction in the number of boats that stalk the sea creatures in their home waters.

“That is especially true of the whale watching cruises in the northern portions of the Sound,” said Lori Marino, president of the Whale Sanctuary Project. “The commercial expeditions and the number of pleasure craft interfere with the sonar that whales depend on to find food.”

Marino is internationally known for her work on the evolution of the brain and intelligence in dolphins and whales, as well as primates and farmed animals. The Whale Sanctuary Project is based in Utah.

Orcas apparently have good taste in seafood, according to the organization president. They prefer to dine on Chinook (King) salmon, which puts them in direct competition with scores of charter operators who take amateur fishermen out every summer in pursuit of the elusive salmon.

Marino recently visited Western Washington and British Columbia in search of a site for a seaside sanctuary for Orca and Beluga whales. She praised the aquarium in Vancouver, B.C. for abandoning its program to breed Beluga whales after a mother and its calf died in captivity.

“They realized that Belugas and other whales cannot live in cement tanks for the pleasure of humans,” Marino said emphatically.

A beluga calf born to much fanfare during the summer of 2010 at the Vancouver Aquarium died of what the facility’s veterinarian and his colleagues from around the world described as a "bizarre" condition.

The calfnamed Nala--is believed to be the inspiration for the song “Baby Beluga” performed by Raffi.

The 46-year-old mother crated even more controversy less than a year later when she died from what has been described as “suspicious circumstances.” Veterinarians later determined that the mother Beluga died of a form of cancer, possibly from ingesting plastics.

Marino said the Whale Sanctuary project has tested the whales and salmon that come into contact with the sightseers in the north Sound. The random tests found the levels of toxins were far beyond acceptable levels for fish and mammals that thrive in open waters.

The Whale Sanctuary Project has identified three factors that endanger the lives of native Orcas: The contamination of the native salmon, boat noise and pollution from runoff, according to Marino.

“The Orcasand the salmonwere fine before we showed up,” she explained. “The Orcas live on a single source of food to sustain themselves. We can order whatever we want in a restaurant or buy a variety of items in the grocery store.

“We should not be competing with the Orcas for food.”