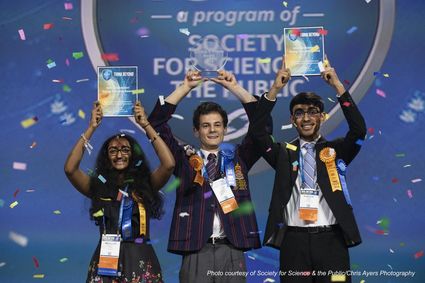 Jackson High senior Dhruvik Parikh, right, walks away with the Young Scientist Award at the recent Intel International Science and Engineering Fair. His $50,000 award was for his project titled, A Novel Sol-Gel Derived SPEEK/Silicon Dioxide Composite Membrane for the Vanadium Redox Flow Battery. He plans to attend Stanford University next fall.

Presenting projects that rivaled a graduate student’s thesis, from diagnosing Parkinson’s disease through face imaging, to an autonomous window cleaning robot for high rise buildings, to an in-depth study of Asian weaver ants’ nesting behaviors, high school students gathered from around the world to compete in the Intel International Science and Engineering Fair (ISEF) last week.

Not only was the competition fierce, but t...