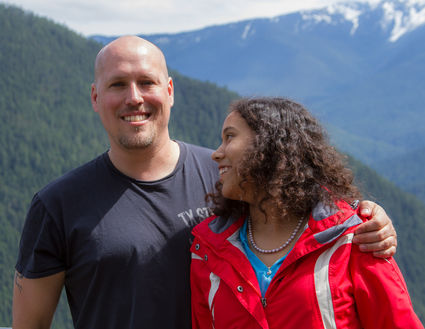 Jackson High School senior Maya Brannan looks up to her dad, Michael Brannan, while the two share a laugh outside their home in the North Wood neighborhood. The older Brannan has staged a one-man campaign to shed light on what he describes as institutional discrimination in the proposed new boundaries for elementary schools in Mill Creek that he claims will disproportionately impact minority communities served by Everett Public Schools.

The media firestorm created by one Mill Creek parent has forced Everett Public School officials to justify their initial boundaries for two elementary schools as based on the district’s core values and projected enrollments in 2022.

Geographer and mapmaker Michael Brannan presented his findings to the Mill Creek City Council on May 8, charging the “the new boundaries drawn up would assign students from minority-dense areas away from Mill Creek Elementary, forcing them to cross two major arterials to attend the lower-rated Penny Creek Elementary.”

The initial boundary plan was develo...