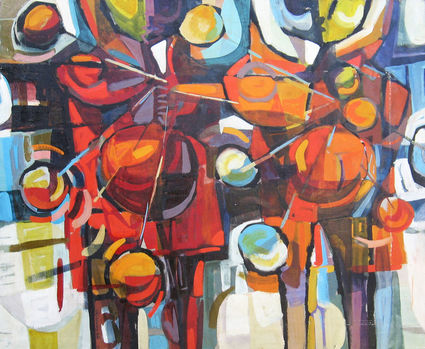 John Muir saw most of the stunningly beautiful natural environments, and he described his fascination with one the following way: "Alaska is one of the most wonderful countries in the world."

He visited decades before it became a state and was part of a growing interest in the region by Americans that went beyond gold and oil. Cascadia Art Museum’s new exhibit, “Modern Alaska: Art of the Midnight Sun,” demonstrates how the rugged beauty and mystery of Alaska enthralled Northwest artists in the 20th century and influenced their work.

The exhibit includes a variety of media, from photography to jewelry to paintings by recognized artists from our region. For the first time shown publicly, 30 photographs by Virna Haffer show the Alaska she and her husband saw in 1938.

The photographs are produced with silver bromide and shimmer with reflective light. The images of the natural landscape are stunning, but two of Yukon women will draw you in.

You will have to spend a while in this room to pick up on so many impactful details, so be sure to take the time to circle it a few times.

One of the photos, a dredge, is placed nearly opposite Steven Fuller’s modern interpretation of a dredge in the first room of the exhibit.

Fuller’s MFA thesis was a totemic series portraying mostly animals with an apparent awareness of being the subject of consideration. Some seemed to look back at you from inside the paintings.

When I read that Fuller was an early teacher of Dale Chihuly, I was reminded of Chihuly’s early work representing native baskets and blankets, and could see inspiration from how Fuller created a seamless flow of images of nature and Alaskan daily life.

The majority of the exhibition is dedicated to Danny Pierce. Pierce, who we have seen before in Cascadia Art Museum, lived in Washington for several years and then became the first artist-in-residence at the University of Alaska in 1959.

He founded the institution’s art department, and through his work, we see how the native artists influenced visitors and new residents from the lower 48.

Combining his modernist aesthetic with the native techniques really make Pierce’s pieces stand out, and any visitor to this exhibit will be drawn to “Eskimo YoYos” or “Migration.”

Pierce seemed to show up everywhere in the Alaska art scene at the time, and the room featured books and videos from Pierce, and even a cookbook illustrated by Pierce with recipes for the wild game so prevalent there, including caribou tamale pie.

Haunting pieces by the native Alaskan artist Joseph Senungetuk, who studied with Pierce at the University of Alaska, will encourage further study. “Whither thou Goest, Shaman” quotes the Bible and presents an assemblage of the natural and contemporary, maybe past and present.

The way the disparate creatures connect in “Yellow Ochre” may be reminiscent of other pieces in the show, but elicit a completely different feeling.

As usual, Cascadia Art Museum is shining a light on the art of our region and the artists we should be proud to call our own.

I found favorite pieces from each of the artists featured in the exhibition but, in the end, would probably have to name Pierce’s modernist interpretation of an “Umiak” (an Eskimo open boat made with skin stretched over a wooden frame) as the one most resonant.

The show is sponsored by the Elizabeth Ruth Wallace Living Trust in Memory of Emil Stadler, who moved to Alaska after graduating from Edmonds High