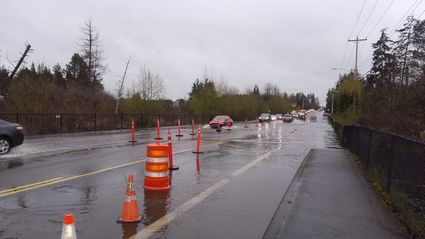 The Mill Creek City Council gave final approval to its contribution to the long-anticipated repairs to 35th Ave. NE last month. The roadway has been sinking since the city annexed the road in 2005. The rate of settlement has slowed, but portions of the road have settled over two inches in the past three years and by two feet over the past 10 years. Beaver damns on Penny Creek amplified the problem.

The $4.692 million agreement was approved at the April 24 meeting of the council.

“We have been planning for the reconstruction of 35th Avenue for more than five years,” said City Manager Rebecca Polizzotto. “Years ago, the flooding across 35th Avenue seemed like an insurmountable problem.”

The construction contract is the largest project undertaken by the city, according to the city manager. She stressed the confidence in the project under the supervision of Gina Hortillosa, the city’s new director of public works and community development services.

“I am confident that we will successfully deliver the solution.” Polizzotto said with confidence.

“The mayor (Pam Pruitt) took a leading role in securing funding for the city’s most significant project to date,” said Polizzotto. “We originally had budgeted that $1.9 million in city funds would have to be used toward the project. Due to the mayor’s help securing alternate funding, we are down to about $3,300 in funding from the city.”

Engineering costs of approximately $484,000 were funded through capital funds from the city.

35th Avenue SE is a three-lane arterial in Mill Creek that carries approximately 15,000 vehicles per day. The road was widened by Snohomish County in 2003 by using lightweight fill on top of a large peat deposit. The road has been continually settling since annexation by the city in 2005. The rate of settlement has slowed, but portions of the road have settled over two inches in the past three years and two feet over the past 10 years.

One of the biggest areas of settlement is over the Penny Creek crossing between 144th Street SE and 141st Street SE, which also has the deepest deposit of peat material as a base. The water level in the surrounding wetlands has also increased due to several factors, including downstream beaver activity. The rising water combined with a sinking roadway has resulted in several road closures over the past few years due to flooding.

The reconstruction project will fix the road between 141st Street SE and 144th Street SE to eliminate flooding and associated road closures. Work includes driving approximately 500 pin-piles through the peat into good bearing soil, constructing a concrete slab on top of the pilings, and then reconstructing and elevating the roadway on top of lightweight concrete fill. The project will raise the road elevation up to four feet above the existing roadway elevation.

The section of 35th Avenue SE between 141st Street SE and 144th Street SE will be closed for approximately eight months.

Traffic that normally utilizes 35th Avenue SE in Mill Creek will be detoured via 132nd Street SE and SR 527 (the Bothell-Everett Hwy). The City strongly discourages the use of side roads off 35th Avenue SE for unofficial detour routes, as these are residential neighborhoods not built for arterial traffic. The side roads will be limited to local access vehicles. Local access means you live in one of the neighborhoods adjacent to 35th Avenue SE, including Highland Trails, North Pointe, Silver Crest, and Silver Glen.

“We encourage our community to be respectful of the local neighborhoods along 35th Avenue and follow the designated detour route,” said Police Chief Greg Elwin. “This will help ensure the safety of those who live in the neighborhoods  including children who play in the area.”

The project schedule will be finalized following a preconstruction meeting in early May with the contractor. The construction is slated to be substantially complete and open to the public in October 2018. However, the final asphalt application may not occur until spring 2019.

Additional information about the 35th Avenue SE reconstruction project is available at http://www.cityofmillcreek.com/35thReconstruction. Community members can sign up for email notifications online. The dedicated project hotline, at 425-582-6070 will include recorded updates.