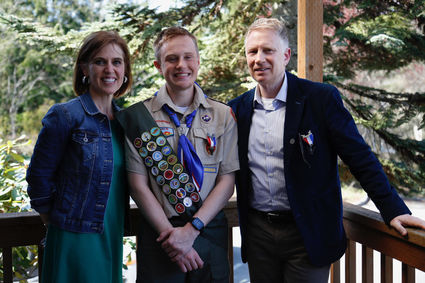 According to his mother, Conner used his math skills to cut the pipes at the appropriate length for each note. After powder coating and painting the pipes, Connor had fifth graders from the school personalize the oversized instrument with thumb prints that were turned into musical notes.

Mill Creek City Councilmember Brian Holtzclaw and his wife Amy stood proudly during the Court of Honor when their son Connor became an Eagle Scout on April 22. His Eagle Project was an outdoor xylophone he built in June of 2016 at Mill Creek Elementary School utilizing a grant the school had received specifically to encourage music appreciation.