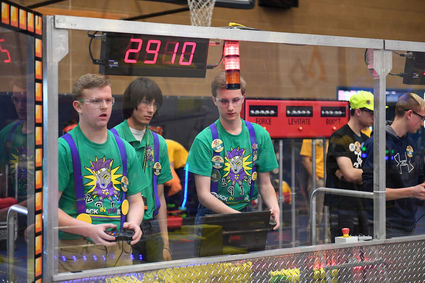 Jackson High School students Caleb Heyes (left) and Jacob Bublitz (right) handle the controls for the robot named Kayla built by the Jack in the Bot team that will compete in the national finals of the FIRST Robotics Competition this weekend in Houston. Team alum Patrick Woolfenden (center) who works at Fluke in Everett, is one of a dozen mentors who have donated their expertise to serve as mentors for the student competition.

Location, location, location is not just the secret to success in real estate. The Robotics team from Jackson High School transformed space for their own machine shop into becoming one of the first schools from Washington state to compete at the #FIRST# Robotics Competition this weekend in Houston.

The Jack in the Bot team from Jackson beat out 39 entries at the regional competition in Mt. Vernon in early March, and went on to capture top honors at the district match-up against 36 high school teams in late March in Snohomish.

The Jackson team finished third out of 154 entries (second in the power rankings) in the Pacific Northwest competition in Portland during the first week of April to earn a spot in the national finals.

This is the second year in a row the team from Jackson has reached the world finals.

“We are excited to be on a field with so many excellent robots,” said Maggie Thorleifson, computer science teacher at Jackson who doubles as the team advisor. “We will bring our A game to represent our school, our community and FIRST Washington in Houston.”

Jackson High principal Dave Peters explained this year’s robot has the unique ability to move sideways to avoid obstacles on the preset course as the robot completes the list of required actions while competing with entries from other schools.

One key factor to the team’s success this year took place last spring, according to Thorleifson, when the Jack in the Bots were given space to house a 440 Tormach CNC mill machine that provided the teenage competitors enough room to design and manufacture their own custom parts for their creation.

Thorleifson said original team member Patrick Woolfenden challenged members of the current team to engineer a serve module that gave the robot a 360-degree range of motion and the ability to move independently.

The mentor from Fluke Manufacturing was one of a dozen professionals who donated time to the high school project. Six of the mentors were parents or alumni of the team who currently work at Boeing. The list also includes parent advisors from Electroimpact, Microsoft and Everett Sound Machine Works.

The Jack in the Bot team is made up of 29 students who met three to four times very week over the summer to design the first module that went into the robot. According to the team link on the competition webpage, Jack in the Bot was first organized in 2009.

“After the team completed the first module, the other three went much faster, and we were finished in September or October,” Thorleifson said. “After that, the programmers had to learn how to program the new drive system.

“After a month of trial and error, they got it to move with precision.”

Thorleifson said the team began the learning curve over again when the game challenge was announced. In addition to her role as team advisor, the Jackson teacher was also given responsibility for arranging travel and hotel accommodations for the 31 participants in Texas.

“This is an amazing group of students, mentors and parent boosters who all travel together to competitions,” Thorleifson said. “I love them.”

Brian Day, parent of one of the team members, said the students and their mentors have put in countless hours to prepare for competition.

“Its nice to see their hard work pay off in such a positive way,” he said.