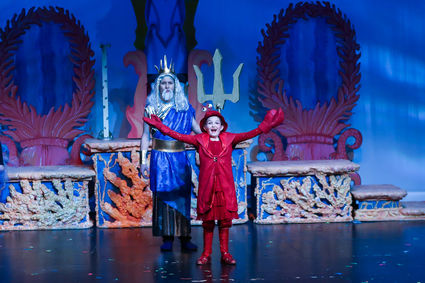 Sarah Bennett captured the hearts of audiences during the Heatherwood Middle School production of Little Mermaid with her portrayal of Sebastian the Crab with her Jamaican accent and her rendition of Under da Sea. One semi-objective/non-parent said. She was super tiny, but packed a punch. Bennett is pictured during a performance with Christian Ivanyuk in his portrayal of King Titon, the ruler of the underwater Kingdom of Atlantis.

The long lines of people waiting to get into the auditorium, and the number of cars circling the lot in search of a place to park forced a 30-minute delay in the start of the final night of the Heatherwood Middle School production of “Little Mermaid.”

When the curtain finally went up on the fifth and final show of the junior version of the award-winning musical on March 30, the audience reacted with the same enthusiasm as a production of “Hamilton” on Broadway.

“Everything was top notch,” said one semi-objective, non-parent. “These are sixth, seventh and eighth graders who a...