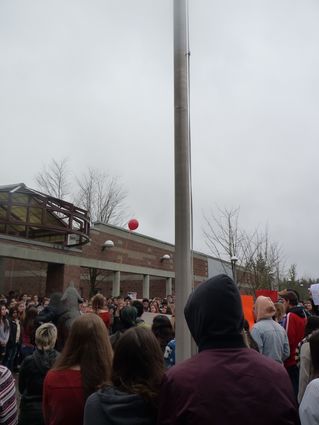 Colored balloons with the names and age of victims of the school shooting in Florida last month were released by junior Kakaanksha Rishi as junior Ashley Lambert read off the names of the 17 victims who died in the school shooting last month in Parkland, FL. More than 500 students at Jackson walked out of class at 10 a.m. on Wednesday to be part of the nationwide protest against gun violence.

The cold drizzle did not dampen the emotions of hundreds of students at Jackson High School who walked out of class Wednesday morning to call for an end to the school shootings that has claimed the lives of students and teachers across the country.

The orchestrated protest at Jackson coincided with peaceful demonstrations at more than 3,000 schools to mark the one-month anniversary of the massacre at Marjory Stoneman Douglas High School on Valentine’s Day.

“Our protest came together after students met with Mr. (Scott) Dyer to determine what we could do on a local basis to add our voic...