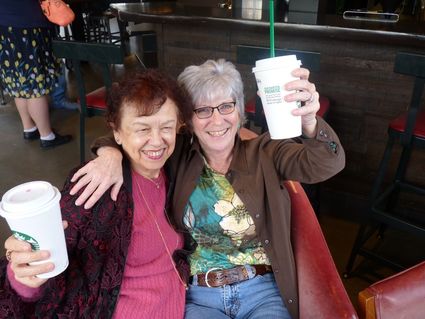 Geraldine Koch (right) raises a cup with her friend Rita Vasquez to the fight seniors are waging with the city over the ability to hold educational classes on the medical benefits of cannabis at the new Senior Center when it opens in May. The information sessions in City Hall North were cancelled over the citys concern with having marijuana-laced products in a city-owned building that also houses a childcare facility. Police Chief Greg Elwin said the city will not interfere in the scope of classes at the new center near 132nd Street SE.

Angry members of the senior community used the results of state-funded studies in their continuing battle to have educational classes on the medical benefits of cannabis continue at the new Mill Creek Senior Center when it opens in May.

The seniors disagree with Mill Creek City Council members who contend that marijuana is a “gateway” drug that leads to the use of other opioids, including heroin. They contend studies conducted in Minnesota, Michigan and Israel support the findings that access to cannabis products has been shown to reduce the need for opioids and the possibility of abuse.

“Their arguments are outdated and out-of-touch,” said Rita Vasquez, a regular at the Tuesday morning coffee gatherings at the senior center adjacent to City Hall.

Vasquez and Janice Anderson quoted from an article published this month in The Hill that a study conducted by the Department of Health in Minnesota indicated 63 percent of cannabis users were able to reduce or eliminate opioid usage after six months.

The results mirrored a similar study in Michigan in 2016 that showed marijuana users were able to decrease the use of opioids by 64 percent. A review of state-registered users in Northeastern states showed a reduction of 77 percent, according to an article written by Paul Armentano, co-author of the book “Why Are We Driving People to Drink?”

“The data is consistent and clear,” Vasquez told The Beacon. “The numbers are even more pronounced for seniors.”