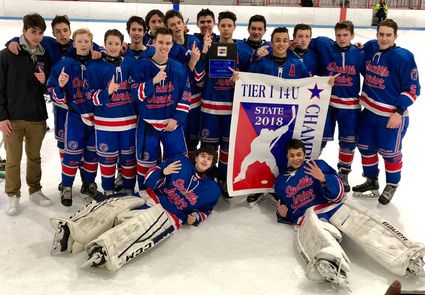 A Glacier Peak High School player helped lead the SeattleJunior Hockey Association’s 14U A1 Junior Admirals to a victory over the Wenatchee Wolverines to clinch the Washington State Tier I title.

Brady Schwab of Glacier Peak and his teammates won the first two games in a best of three tournament. The team secured a spot in the USA Hockey Pacific District Tier I tournament March 8-11 in San Jose, California.

“This is an incredible accomplishment for our team,” head coach Regan Mueller said. “We’ve been working towards this goal all season and are thrilled to represent Washington at districts.”

“We have risen to each challenge in British Columbia and Washington and now we are eager to play the best of the best in the western U.S.,” Waram said.

The team will take on the Alaska All-Stars, Anaheim Jr. Ducks and San Jose Jr. Sharks in the round robin portion of the district tournament.

The Seattle Junior Admirals team is made up of players 14 years old and younger from throughout the Puget Sound area.

Other players on this team are: