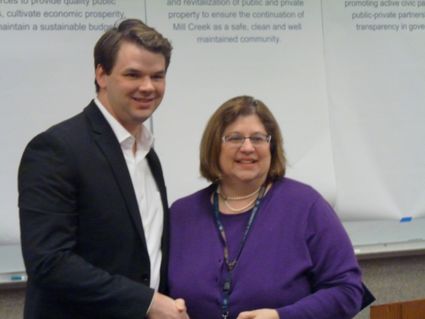 Mill Creek City Manager Rebecca Polizzotto congratulated Recreation and Tourism Manager Brian Davern for his 10 years of serve to the city during the city council meeting on Tuesday, Feb. 27. Davern began as working for the city in 2008 as an assistant in the recreation department. He earned the title of director for the newly-formed Recreation and Tourism Department in July of 2016. He has also played a key role in doubling the size of the citys 3-on-3 basketball tournament and expanded participation in parades staged by the city.

Recreation and Tourism Manager Brian Davern was honored by the Mill Creek City Council on Tuesday night, Feb. 27, for his hands-on involvement with community activities for the past decade.

Davern joined the city staff of Mill Creek in February 2008 as a recreation assistant and was promoted to recreation and tourism manager in July 2016.

Early in his career, Davern doubled the size of the city’s annual 3-on-3 basketball tournament and expanded the city’s Youth Basketball League. His involvement with the league enabled him to build relationships to attract more people from outside the...