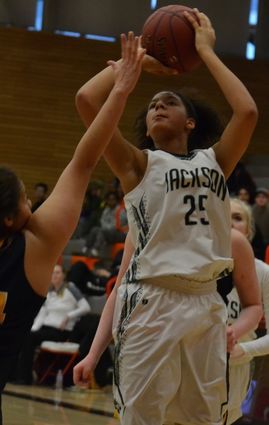 Jackson's Sydney Carter shoots the ball during the 4A District playoffs.

Jackson shook off a sluggish start in the first quarter but ultimately wasn’t able to cash in on its opportunities against Mariner.

Freshman Taliyah Clark scored a game-high 25 points to lead the Marauders to a 56-50 victory over the Timberwolves in a loser-out 4A District 1 girls basketball tournament game Thursday, Feb. 15, at Everett Community College.

The loss was the third in a row and second in the district playoffs to Mariner, who later fell to Glacier Peak in a winner-to-state regionals/loser out contest later in the week.

The Wolfpack (12-11) fell behind 17-8 after the first quarter but climbed back into the game with a strong second quarter performance. Jackson outscored Mariner 13-6 and headed into halftime facing only a 23-21 deficit.

With her team trailing 35-26 with about three minutes left in the third period, Jackson’s Megan Mattison connected on three 3-pointers and a 2-point shot to help cut the deficit to 37-35 at the end of the quarter.

Mattison led the Wolfpack with 19 points and teammate Alexa Martin had 13 points.

“We had opportunities that we didn’t take advantage of,” Jackson coach Duane Morris said. “In games like that you’ve got to take advantage. They (players) put every bit of their heart into it.”

The core of the Wolfpack  juniors Olivia Skibiel, Lauren Schillberg, Martin and Mattison  will be back next season.

“We saw continued improvement from the previous years and we saw great improvement from our underclassmen,” Morris said. “Our seniors reached their potential  So it was encouraging in all those ways.

“I was really excited about our competitiveness, especially how we competed in the last week.”