Barkada: An octopus of another color | Arts & Appetite 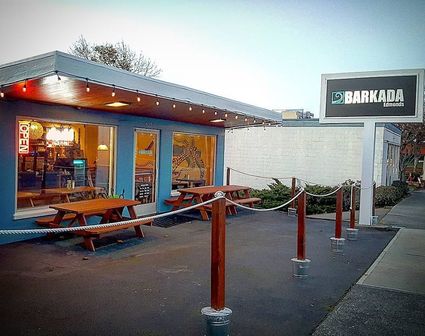 An octopus can change the color of its skin to reflect different environments. The new chef in town, Brian Madayag, is definitely showing a new kaleidoscope right here in Edmonds.

Chef Madayag worked for Seattle super-chef Tom Douglas but returned home to Edmonds (where he was born and raised) to offer us Barkada, a remarkable mix of Pacific Northwest, Filipino, Hawaiian, Japanese and Guamanian cuisine with cocktails unique here and anywhere.

I had heard about the “slushy” drinks and had to order the Manila Ice Slushy ($10), a whiskey based blend with a citrus base (calamansi, which is like a clementine) served in a street market bag  refreshing and tasty.

Enjoying a slushy cocktail in the summer sunshine on the front patio of Barkada will be even lovelier.

The space inside is as inventive as the menu, with hand-painted murals (including one of an octopus) and two levels to choose from. A friend and I sat downstairs where it is quieter and even has board games, but being by the serving kitchen upstairs looked like a great experience for next time.

It has a very familial and warm feel, while also portraying the clean sophistication of a restaurant focused on the details.

The staff, and Madayag, are all very friendly, charming, and exceedingly professional. We were able to ask questions about the menu but also interact about living and being in Edmonds. In fact, several local business owners were enjoying dinner at the restaurant that night.

The seasonal menu for "Week 6," as it was titled, featured five small plates, including an order of shrimp chips (crunchy, light, savory), five larger plates (salads, noodle bowls, the signature pork adobo, and two fish dishes that we ordered), as well as four sushi choices (“Dungeness Crab Burrito” anyone?).

We were hungry so ordered the shrimp chips, Oregon Tuna Kilawen ($12), Hamachi Poke Boat ($13), and the Big Kahuna Tuna Roll ($9, $6 during happy hour) to share. When they came out, casual style on paper platters, we shared and compared.

The Hamachi Poke Boat seemed to combine flavor and texture in each bite, with the yellowtail poke next to the crab salad sitting on a bed of perfect sushi rice, the crispiness of the salty furikake, all paired with cucumber and edamame.

I do not typically order dessert (gasp!) since savory calories seem far more worth it to me. However, we had to try to Ube Doobie cookies (coconut and ube, or purple yam) made by a baker in Seattle. They were somehow homey and satisfying while also being curious and addictive.

Edmonds’ food scene today is very different from 15 years ago. Back then, a tiny place called Olives opened on Fifth Avenue North with a chef from San Francisco, Michael Young, who had worked with internationally renowned chef Michael Mina.

Residents were as surprised by the level as food nearly as much as they were shocked by a restaurant open until 10:00 pm. Barkada demonstrates just how far we have come.

The word Barkada, or "friends" in Filipino, and the new restaurant strives to “create a fast casual and laid-back atmosphere” and “to serve unique and creative dishes” that change weekly based on the season, the inspiration, and the market.

When I arrived, I was reminded of my Puerto Rican roots with the smell of vinegar and familiar ingredients like yam and adobo, but then the unexpected materialized. Barkada demonstrates why diners should eschew falling into a food rut and try something different.

Barkada is located at 622 Fifth Ave. S, Edmonds, and is open Tuesday through Thursday, 310pm, and Friday and Saturday from 3 until midnight. Closed Sundays and Mondays.